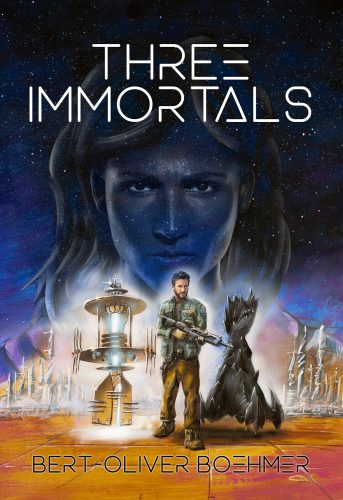 About Three Immortals by Bert-Oliver Boehmer:

Extra-galactics ravaged the Milky Way and humans saw their interstellar civilization burn. 2400 years later, humanity has risen again. Its immortal rulers are challenged by a ruthless empress. When popular war hero Kel Chaada rises to lead a small nation of mining worlds, his life gets crushed between the clashing powers. Charged with murder, he has to flee human space. At the fringes of the known galaxy, he discovers ancient alien civilizations, and the legendary powers they have to share.

Why was their existence purged from the historic records by the immortal elite?

Bert-Oliver Boehmer is a science fiction writer and author of the new novel “Three Immortals”. After two decades of working with innovative software and bioinformatics companies, he turned his passion for futuristic technologies, exotic biology, and artificial intelligence into the foundation of a vast space opera universe.

Bert-Oliver holds a degree in computer science and has traveled this planet extensively. Since 2020, he focuses on telling stories about what we might find elsewhere and elsewhen.

He lives with his wife and daughters in Southern California, where his Jeep leaves tire tracks on many trails.