You are here: Home / Featured Books / The Paisley Hunter Detective Files: The Butcher, The Takers, And The Money Makers (Book 1) by Alan W. Hounshell 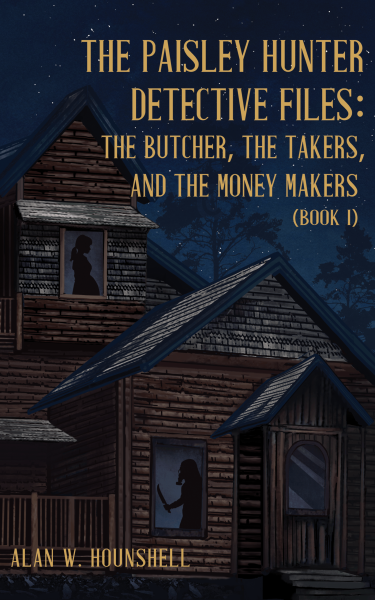 The Paisley Hunter Detective Files: The Butcher, The Takers, And The Money Makers (Book 1) by Alan W. Hounshell

For former Chicago Police Detective Paisley Hunter, retiring to run a farm and an ice cream shop in Fester, Kentucky was a dream come true. It was a way to forget about her husband’s unsolved murder, bond with her daughter Kansas, and reduce her multiple sclerosis stress-related symptoms. However, some retirements are never meant to be.

A dead body discovered in Paisley’s ice cream shop’s freezer pulls Paisley into the dark world of the Black Market Syndicate (BMS), a greedy, global, criminal organization with powerful allies that sells babies and young teens for exorbitant prices, who so far has been unstoppable. Things become more complicated when a cannibalistic serial killer known as the Butcher becomes involved in the BMS’ Red River Gorge operation.

As Paisley closes in on the pregnant teens’ location, she finds betrayal and deceit at every turn. Paisley, along with an old high school boyfriend, Kentucky State Police Detective Bishop Knight, and her former CPD partner, Charlie Yocum (now an FBI agent), take on the Butcher and the BMS. Will they be able to stop the BMS before more babies are taken, and more girls are killed? Who can Paisley trust when the BMS has built itself on secrecy and loyalty and whose motto is “profit first?” Most of all — who is this Butcher, and why does this killer have an insatiable craving for human flesh?

Get This Mystery Book From Amazon.

Alan grew up in the rural areas of Breathitt & Wolfe County, Kentucky. Before writing books, he wrote dinner theater plays, writing parodies of shows from the 50s and 60s. Saturday Night Live, the 70s and 80s movies, and living in a small community motivated Alan to channel his imagination into writing. Alan has been professionally writing and publishing novels since 2016.

Alan enjoys writing fiction (science fiction and fantasy). He embraces being a Trekkie, attending comic cons, and watching superhero movies (DC and Marvel). This is his sixth novel, with more in the works.

Alan graduated with a master’s degree in clinical psychology from Morehead State University. He currently lives in Lexington, Kentucky, with his wife Lenore and their critters. Alan is working toward retirement so he can have more time to write. Alan asks that you donate to your favorite charity and if you don’t have one, consider the National Multiple Sclerosis Society or the Humane Society.