You are here: Home / Featured Books / Sign of Nine Stripes by Carol Amorosi 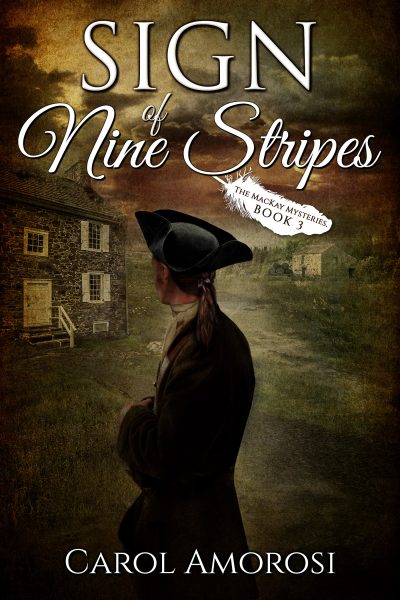 The third time’s lucky. Or so they say. Angus believes his chance for success lies in the colonies. When he receives an offer of employment, he crosses the Atlantic for the third time to follow his dreams. What could possibly go wrong?

In 1763, Angus followed his heroes, Charles Mason and Jeremiah Dixon, to the New World on their ground-breaking survey. Five years later, he returned to London with no prospects. Now, Angus sails back to the colonies. But this time will be different. Joel Bailey has offered him a position as a surveyor. His friend, Liam, is there. The uncle he believed was dead is there. And a beautiful Native lass is there. Angus thinks he’s finally on his way to making a life for himself.

But there’s an undercurrent of danger running throughout the colonies. Smuggling, protests, and secret organizations are the norm. New taxes and restrictions are being imposed. And people are taking sides against each other.

Angus doesn’t want to choose sides. But when a dead body is delivered to his employer’s home, what choice does he have?

History permeates almost everything Carol enjoys, whether it is travel or volunteer work. Just ask her family! She enjoys gardening, especially learning about plants from the past and their culinary and medicinal uses.

Today, Carol and her husband, Dave, call Germany home, and she spends her time practicing German on their two cats and Widgit, the History Hound, who joins them on their escapades.

Over the years, she has put her passion for history to good use as a volunteer and an interpreter spanning different periods from the Romans to the Middle Ages to the Revolutionary War. Most recently, she took part in a Roman dig on Malta and was an interpreter with the 7th Virginia Regiment.