You are here: Home / New Books / Second Coming by D. B. Borton 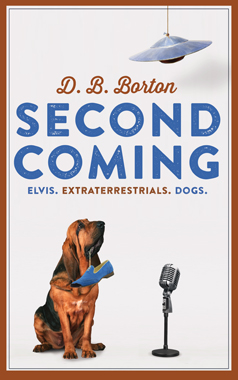 About Second Coming by D. B. Borton:

Hank Jones isn’t kidnapped by aliens. He goes voluntarily. What does he have to lose? It’s spring break, 2007. His freshman comp students have taken their bad grammar and bad attitudes to Florida. His dissertation is going nowhere. And his ex is sleeping with his dissertation director. So when two aliens walk into a bar in Bloomington, Indiana, looking for directions, he’s their man. Hank finds himself riding shotgun to Washington and acting as consultant on a mission to save the Earth from annihilation.

This book is for everyone who has a soft spot in their heart for those sci-fi flicks from the 50s, and especially if they’ve wondered, what if those guys came back? And what if they expected America in the Eisenhower Era—a time of Studebakers, Ipana toothpaste, and Brylcreem—when the Atomic Age was just beginning? The android who’s had an Elvis makeover doesn’t even know that his idol is dead.

SECOND COMING is not so much about space aliens but about celebrity in 21st-century America, the seductiveness of consumer culture, the self-destructiveness of the human race, and the very human pleasures of friendship, dogs, and rock ‘n roll.

Author Bio:
D. B. Borton is the author of two mystery series—the Cat Caliban series and the Gilda Liberty series —as well as the standalone mysteries recent novels Smoke and Bayou City Burning and the humorous science fiction novel Second Coming. She is Professor Emeritus of English at Ohio Wesleyan University.
A native Texan, Borton became an ardent admirer of Nancy Drew at a young age. At the age of fourteen, she acquired her own blue roadster, trained on the freeways of Houston and the broad stretches of oil-endowed Texas highway, and began her travels. She also began a lifetime of political activism, working only for political candidates who lost. She left Texas at about the time everyone else arrived.
In graduate school, Borton converted a lifetime of passionate reading and late-night movie-watching into a doctorate in English. She discovered that people would pay her to discuss literature and writing, although not much. But because she found young people interesting and entertaining and challenging, she became a college teacher, and survived many generations of college students. Later, during a career crisis, she discovered that people would pay her to tell stories, although even less than they would pay her to discuss stories written by someone else.
Borton has lived in the Southwest and Midwest, and on the West Coast, where she has planted roses and collected three degrees in English without relinquishing her affection for the ways in which actual speakers constantly reinvent the language to meet their needs. In her spare time, she gardens, practices aikido, studies languages other than English, and, of course, watches movies and reads.