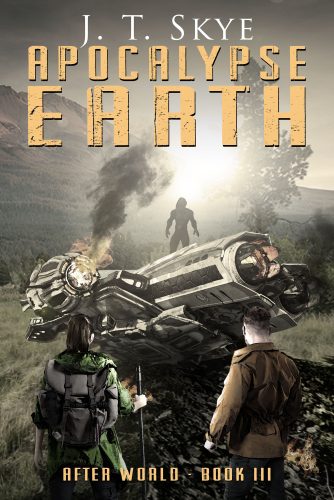 And, you have to find him before he grabs one of the last star ships off of Earth, paying for passage with the human he stole.

The siege of Terra ends with the collapse of the alien armada… but that is just the beginning of the terror and the journey our human heroes face when one of their own is taken as a wild-caught slave to be bartered for passage off Terra.

And with the new aliens closing down orbital access, the evil alien is desperate to escape before he is caught and killed. That is especially true for the Brinlo Orbital Overlord, when his escape ship is holed by a particle beam cannon and crashes on Earth.

He is desperate to find another ship before his time runs out. He grabs a human to take as a slave for barter and the urgent journey begins. And, time is running out!

Bring your hunting bow and fastest travel pack to stay up with Bill, Maria, Ben and the others as they track down the alien and work to figure out how to get inside his impenetrable personal defense screen and survive the blasts from his Warrior Assault Rifle.

It is the ultimate battle of alien technology against the basic HUMAN will to succeed.

The alien has everything to lose and the humans will not be denied.

In this epic adventure, not all humans are good and not all aliens are bad. The difficult journey is to tell them apart.

Everything comes to an intense focal point at the end, just as the evil alien finds a ship to help him escape.

Read the stunning conclusion to this Sci Fi book set and series set in the rich science fiction & fantasy alternative history of the Trigellian Universe.

I love to write stories of heroic quests, ancient prophecies and mythical journeys along roads less traveled. They include grand, military space battles, secret alliances, desperate treachery, vengeance and retribution against the arrogance, elitism and glory hunting found at the highest levels of society.

From pirates, slavers, saboteurs and assassins… to elite Warriors, trader families, cargo haulers and the many desperate refugees just trying to escape conscription.

If you love Sci Fi, Fantasy and Action Adventure, join me on the journey of a life time.