You are here: Home / Mystery Books / A Kind of Hush By JoDee Neathery 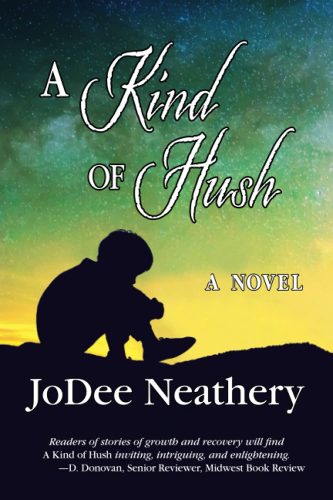 About A Kind of Hush By JoDee Neathery:

A moment in time changes a family forever. The Mackies are enjoying a June outing when tragedy strikes. Was this a horrendous accident or something more heinous?

This award-winning author captures “the conflicting, layered emotions of grief and heartache while simultaneously weaving a fast-paced mystery…into this family drama.” Kirkus Reviews.

JoDee Neathery is a firm believer that dreams do come true with the release of her debut award winning novel, Life in a Box, in July 2017 asking the question, how much would you sacrifice to hide a secret? A few colorful characters were plucked off her family tree, encasing their world inside fictional events to create her literary novel.

The idea for her latest novel, A Kind of Hush, appeared in the middle of the night with the profile of the young boy and the first few sentences scratched out on the every-present notepad on the nightstand beside her bed. “I didn’t know the whole story, but I knew that whatever I wrote next, this young lad had to play a major role in the narrative and Gabriel Edward Mackie doesn’t disappoint.”

JoDee was born in Southern California moving to Midland, Texas at the age of five. Her professional career began in the banking industry moving into public relations executive recruiting until relocating to East Texas where she experienced more opportunities to write and enjoys a byline, Back Porch Musings, a lighthearted view of life in general, in an area newspaper. Her dream “job” has been chairing and writing minutes and reviews for the community book club, Bookers, for eighteen years and it was those members that championed her novel writing journey. “They believed in me before I did.”