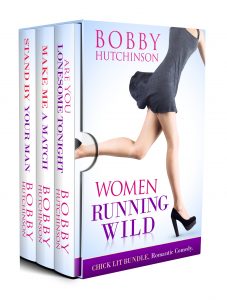 Three full length romantic comedies with a touch of mischief and suspense.
MAKE ME A MATCH–Tessa McBride is working for a matchmaker, and she and Eric have a history. He humiliated her when she was a shy, trusting girl. Well, she’s not anymore. She vows to prove to Eric that she’s more than a match for his schemes–and show him what he’s been missing all these years. But there’s more to this matchmaking business than Tessa every suspected.

ARE YOU LONESOME TONIGHT–On the telephone, Maxine Bleckner, frazzled single mother, is India Mcbride, voluptuous sex goddess.
Harry Watson is also a single, stay-at-home parent to his three-year-old daughter, Sophie. He’s a freelance writer, and his latest assignment is to find out what telephone sex workers are really like. But all his preconceived ideas are wrong, wrong, wrong. India is nothing like he expected, but very much what he’s dreamed of.

STAND BY YOUR MAN–Maddie’s a private detective, her father’s a retired cop, and her sister Francie’s in love with criminal.
Francie wants Maddie to prove Sebastian’s innocent, but the Seattle Police have proof that he’s guilty. And who wants their sister married to a bad guy?
Sebastian’s brother, Finn, has hired Maddie to find out the truth and set his brother free. Finn makes Maddie’s blood boil and her bells ring–and she’s truly, madly, deeply in love with his little daughter, Zoe. And she’s pretty certain Sebastian is guilty as charged, so she’s trying her best not to find evidence to the contrary. She’s doing the exact opposite of what Finn hired her to do, betraying the guy she—well, the guy she’s supposed to be working for, the guy she just might, maybe, almost be falling for.

Three laugh-out-loud full-length romances to keep you reading all night!

Author Bio:
Bobby Hutchinson loves people who don’t fit society’s definition of normal. She’s a friendly hermit who disproved the belief that you can’t go home again; she lives alone in the coal mining town in the Rockies where she was born.
She lives, breathes, reads and writes books, and has written and published upwards of 55, mostly romance, which she obviously needs to learn a lot about.
She likes this quote:
“When you change the way you look at a thing, the thing you look at changes.”