You are here: Home / New Books / Where Nightmares Come From: The Art of Storytelling in the Horror Genre (The Dream Weaver Books on Writing Fiction Book 1) 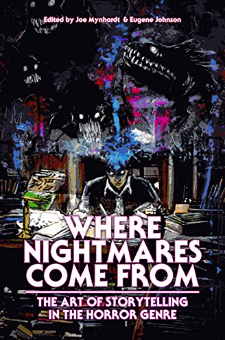 About Where Nightmares Come From: The Art of Storytelling in the Horror Genre (The Dream Weaver Books on Writing Fiction Book 1):

Book one in Crystal Lake Publishing’s The Dream Weaver series…
Where Nightmares Come From focuses on the art of storytelling in the Horror genre, taking an idea from conception to reality—whether you prefer short stories, novels, films, or comics.

Introduction by William F. Nolan
IT’S THE STORY TELLER by Joe R. Lansdale
A-Z OF HORROR of Clive Barker
WHY HORROR? by Mark Alan Miller
PIXELATED SHADOWS by Michael Paul Gonzalez
LIKE CURSES by Ray Garton
HOW TO GET YOUR SCARE ON by S.G. Browne
STORYTELLING TECHNIQUES by Richard Thomas
HORROR IS A STATE OF MIND by Tim Waggoner
BRINGING AN IDEA TO LIFE by Mercedes M. Yardley
THE PROCESS OF A TALE by Ramsey Campbell
GREAT HORROR IS SOMETHING ALIEN by Michael Bailey
A HORRIFICALLY HAPPY MEDIUM by Taylor Grant
INTERVIEW WITH JOHN CONNOLLY by Marie O’Regan
THE STORY OF A STORY by Mort Castle
WRITING ROUNDTABLE INTERVIEW with Christopher Golden, Kevin J. Anderson, and Silvia Moreno-Garcia
HOW I SPENT MY CHILDHOOD LOOKING FOR MONSTERS AND FOUND POETRY INSTEAD by Stephanie M. Wytovich
BITS AND PIECES INTERVIEW WITH JONATHAN MABERRY by Eugene Johnson
THE REEL CREEPS by Lisa Morton
THE MONSTER SQUAD by Jess Landry
WHAT SCARES YOU by Marv Wolfman
PLAYING IN SOMEONE ELSE’S HAUNTED HOUSE by Elizabeth Massie
CREATING MAGIC FROM A BLANK PIECE OF PAPER: Del Howison interviews Tom Holland, Amber Benson, Fred Dekker, and Kevin Tenney
Z NATION: HOW SYFY’S HIT SHOW CAME TO LIFE by Craig Engler
LIFE IMITATING ART IMITATING LIFE: FILM AND ITS INFLUENCE ON REALITY by Jason V Brock
WHERE NIGHTMARES COME FROM by Paul Moore
STEPHEN KING AND RICHARD CHIZMAR DISCUSS COLLABORATING by Bev Vincent
CHARLAINE HARRIS DISCUSSES STORYTELLING by Eugene Johnson
WHAT NOW? by John Palisano

This collection is perfect for…

Come listen to the legends…

Brought to you by Crystal Lake Publishing—Tales from the Darkest Depths.

Elizabeth Massie, an eighth generation Virginian, has been writing professionally since 1984. Most of her works are in the horror/suspense genre (Sineater, Hell Gate, Desper Hollow, Wire Mesh Mothers, Homeplace, Afraid, It, Watching, Naked on the Edge, and more), but she also writes historical fiction, mainstream fiction (Homegrown), media tie-ins (The Tudors, Versailles, Buffy the Vampire Slayer, Dark Shadows), educational materials for American history textbooks, and poetry (Night Benedictions). Her first novel, Sineater, and her novella “Stephen” have both won Bram Stoker Awards from the Horror Writers Association. Her Tudors novelization (Season 3) won the Scribe award. Her short fiction can be found in numerous anthologies and several years’ best collections. She, along with Mark Rainey, is currently working on Ameri-Scares (Crossroad Press) a 50 novel series of spooky books for middle grade readers (age 8-12), a series which was optioned for television by Warner Horizon and which, as of December 2021, has 13 novels so far. She also continues to work on new horror novels and short stories for adults. Check out her lead story in Freedom of Screech, edited by Craig Spector and her newest tales “It’s in the Cards” in The Porcupine Boy and Other Anthological Oddities, “Those Who Are Terrified” in Midnight in the Graveyard, and “Scarves,” which is featured in the ACLU-benefiting anthology, Dystopian States of America (March 2020.) Her newest collection, Madame Cruller’s Couch and Other Bizarre and Dark Tales, was released from Crossroad Press August 2021.

On the Outside Looking Up: Seeking and Following God Beyond the Gates of Organized Religion, a nonfiction memoir/exploration of religious beliefs from the point of view of an un-churched believer, was released June 2016. A clear departure from horror, On the Outside Looking Up is part spiritual memoir, part musings on issues that religions tend to tackle, and part extended hand to un-churched believers to assure them they are not the only ones. A believer for years, Massie offers up her personal spiritual journey, struggles, and understandings to help bridge gaps between the unchurched, churched, and those who have no belief and/or no interest in religion.

A member of Amnesty International for more than 35 years, Massie writes numerous letters on behalf of victims of human rights abuses worldwide. She lives in the Shenandoah Valley of Virginia with her husband, talented illustrator and theremin player, Cortney Skinner, and enjoys hiking, geocaching, knitting, traveling roads she’s never been on before, and visiting amusement parks (the older, the better.) She founded and for nearly four years managed the Hand to Hand Vision project (on Facebook) that raised thousands of dollars to help others during these tough economic times. Though she has a home office, she likes to work at Starbucks a couple days a week. There she can feel like part of the human race. And have a chai.