You are here: Home / Featured Books / When Love Sticks Around 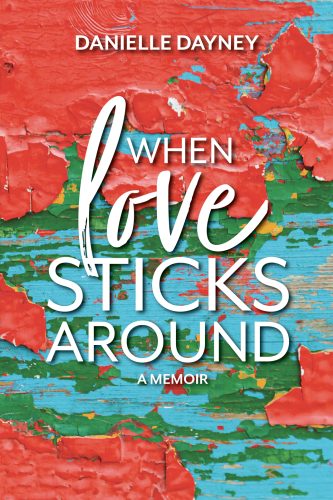 About When Love Sticks Around:

Hand-me-down pants that don’t quite fit, twilight bike rides down sleepy neighborhood streets, sweaty family camping trips, the things that almost break you, and the things you barely notice—it’s hard to see the shape of your life until you’re looking back on it.

In this collection of short essays, Danielle Dayney recounts her experiences as an awkward child in the piecemeal family that raised her. From her biological father’s absence to her mother’s battle with cancer to the birth of her daughter, Dayney’s stories venture beyond anecdote to nest safely among the tangled experiences that shape the people we become. With a keen eye for the pebbles of humor and glimmers of beauty along the rough roads of her life, Dayney has crafted a book that feels as familiar as a home-cooked meal and as exciting as the first night in a new city.

When Love Sticks Around is a memoir of love, loss, humor, identity, and above all, family—the one you’re born into and the one you gather along the way.

Those are the things worth sticking around for.

Born and raised in Ohio, Danielle Dayney got her start writing rock concert reviews and band interviews for Toledo-based music magazine The Glass Eye. After leaving Ohio, she set aside her journals for several years to work in the real estate industry, but after her mother passed away from cancer, she returned to writing, initially as a cathartic way to understand her grief. Since then, her work has appeared in The Fredericksburg Literary and Art Review, online at Sunlight Press, Dead Housekeeping and The Mindful Word, and in several anthologies including The Virginia Writers Centennial Anthology, Nevertheless We Persisted, Beach Reads: Lost and Found, and Beach Reads: Adrift. She has also received awards for two creative nonfiction essays at BlogHer. Danielle lives in the rolling hills of Virginia with her husband, two daughters, and two dogs.