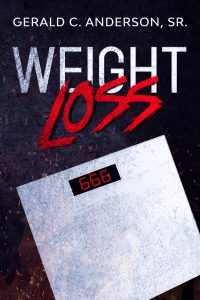 The Mark of the Beast comes in many forms.

Stacy Friday has always struggled with her weight. After trying every dieting regiment and with a hatred of the gym, she finds herself cheating on her diet and unable to say no to the foods she loves. She feels like she’ll never be able to succeed with her goals and become more attractive to men.

But when she discovers a brain chip that could control her diet and metabolism, all her dreams seem possible. She jumps at the idea – even when her friends warn her it’s the Mark of the Beast.

At first, the chip works like a charm. Then the side effects begin. Her weight loss gives way to excessive spending, flirting, and cheating on her boyfriend.

And as more and more people begin getting these chips, Stacy realizes her friends might just have been right about the Mark of the Beast after all…

If you like gripping Christian fiction with an apocalyptic theme and an important message, then you won’t want to miss Weight Loss. Grab your copy today!

Author Bio:
Gerald C. Anderson, Sr. was born and raised in Tampa, Florida. He spent most of his childhood life growing up in the Belmont Heights area of Tampa.

In his service career, Gerald traveled the world with assignments to California (twice), Florida, Kansas, Maryland, West Germany, and Korea. Upon his last assignment in Maryland and after retirement from the Air Force, Gerald began working in the United States Federal Government’s Department of Energy. In 2003, he moved to the Internal Revenue Service, and in 2007 he joined the Department of Education.

In 2005, Gerald obtained his Bachelors of Science degree in Computer Information Systems from Strayer University, and in 2008 he received his Masters of Administration degree in Criminal Justice Administration from the University of Cincinnati (UC).

Righteous Productions and The Lyfe Magazine

In August of 2015, Gerald and Renata M. Smith agreed to become business partners and started Righteous Productions. Together they wrote the script for the movie version of Standing Firm and co-produced the movie.

In late 2016, Righteous Productions launched the successful magazine, “The Lyfe Magazine.” The Lyfe Magazine is a Christian lifestyle magazine with a mission to inform, educate and entertain people.

In 1992, Gerald turned his life over to Jesus Christ and a life with Christ at the head. He is currently a musician in church. He continues to reside in Maryland with his son.