You are here: Home / Action & Adventure / True Experiences with a Sorceress of the Four Portals, From the Tibetan Journals of M.G. Hawking 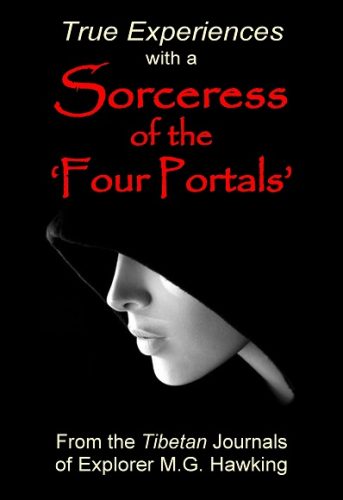 About True Experiences with a Sorceress of the Four Portals, From the Tibetan Journals of M.G. Hawking:

Free on Amazon May 20th thru May 22nd. This volume details the experiences explorer M.G. Hawking and his companions had in a remote region of the Himalayas with the exceptional Mani Choejor, including accounts of her demonstrations of psychokinetic powers and in-depth descriptions of the esoteric knowledge that enabled her to attain such remarkable abilities.
Five-Star reviews: “Advanced Teachings but Suitable for Beginners. Hawking relays a series of teachings from Mani, a B’on sorceress. Mani is unbelievably powerful at manifesting the physical reality she wants to experience, and the awe most Western readers would experience from such capabilities really make her words a treat, especially the meditation/visualization exercises, advice for beginners, and framework explanations concerning how she accomplishes many of the more advanced aspects of her power. Highly recommended.” – “Amazing and inspiring. I love this book! It’s so well written and so inspiring. It has helped me tremendously.” – “Truly an inspiration. A must read for those who yearn to break free and open their minds to the infinite possibilities of life.” – “I love all of MG Hawking books, such wisdom and the visualizations that he includes are amazing if used daily.”
To merely say that Mani is an extraordinary individual would be to gravely understate the case. Born in a small village in Tibet, she was raised and mentored in a monastery by an Abbot known to be a true master of great power, one of perhaps two remaining instructors of the ancient esoteric arts of the ‘Four Portals’ teachings.
A group of highly esoteric teachings setting forth the true nature of physical reality and techniques of powerful elemental magic, or sorcery, the ‘Four Portals’ are of extreme antiquity. The first extant traces of the teachings appear as part of the lore of the pre-Tibetan Zhang Zhung culture that arose on the Qinghai-Tibet Plateau some 4000 years ago, but are believed to have originated far earlier. Being an exceedingly restricted body of knowledge, said to convey enormous powers, the teachings disappear from the historical record for some 2600 years, not to reemerge until the 7th century AD in the arcane scriptures of the ancient pre-Buddhist B’on religion, as found in the Himalayan highlands of Tibet.
According to the ancient Zhang Zhung and B’on traditions, the teachings of the ‘Four Portals’ were formulated in 16,000 BC by the earliest known Buddha, Tonpa Shenrab Miwoche. Like Siddhārtha Gautama, our most recent historical Buddha, Shenrab renounced his life as a prince to become a monk, achieved enlightenment, and taught others how to attain the most elevated wisdom. The rare esoteric teachings of the ‘Four Portals’ contain enormous amounts of elemental sorcery, in keeping with their view of the cosmos as a psycho-physical unity, able to be manipulated in heightened states of awareness through clandestine techniques and practices.
These deeply esoteric teachings begin with a profound premise: “The Universe is but a mirage which exists in the mind, springs from it, is controlled by it, and sinks into it.” To understand this premise in a contemporary context, we may consider the following remarks from the legendary physicist Max Planck, Nobel Prize winner, originator of Quantum Mechanics, and close associate of Albert Einstein: “As a man who has devoted his whole life to the most clear-headed science, to the study of matter, I can tell you as a result of my research about atoms this much: There is no matter as such. All matter originates and exists only by virtue of the existence of consciousness. The mind is the matrix of all matter. I regard consciousness as fundamental. I regard matter as derivative from consciousness.”
Transcribed directly from the archived field notes and journals of explorer M.G. Hawking’s five years in Nepal and Tibet, this book contains comprehensive narratives of Hawking’s experiences and conversations with a true sorceress, providing first-hand accounts of her psychokinetic and telekinetic powers, along with descriptions of her lengthy apprenticeship and the teachings that allowed her to acquire such extraordinary abilities.
2021 Edition, 20 Chapters, 32 Subsections, e-reader edition page count 422 (estimated, actual count varies depending on the reading device used). Includes Reference Citations and a Source Material Anthology Section. For more information, please see the ‘Look Inside’ feature on the book’s Amazon page. Thank you.