You are here: Home / Featured Books / The World Before the Flood 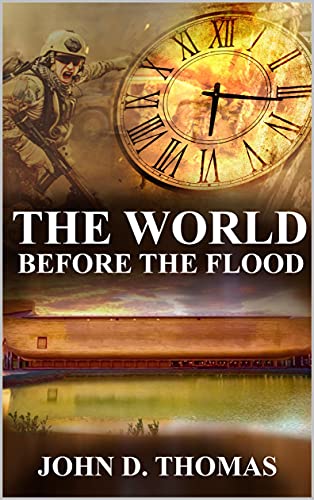 About The World Before the Flood:

If you enjoy a biblically themed book like the Left Behind series or The Chosen, The World Before the Flood is an exciting new book that provides a view into what the world might have been like in the days of Noah.

Time traveling, Bill McKay finds himself on an exotic planet. It appears to be a paradise with beautiful weather and plants, peaceful animals and even dinosaurs, and people living extremely long lives.

Bill meets a man who claims he has a message from God that a great flood is coming that will wipe out all land life on the planet except those who board his ship. Is this a madman or is Bill on the earth before the flood? If this man is Noah, will Bill’s knowledge of the future help Noah or lead to Noah’s death and the destruction of all?

“It is a romantic fictional account with unexpected plot twists–very creative… the author’s Army battle training and experience are used to provide lots of real-life detail in the book’s battle scenes.” Ric Routh, CEO, B4Worldview

This digital copy will be free on Amazon over Thanksgiving–November 24 through the 28th.

Author Bio:
John D. Thomas, a graduate of West Point, was a former Captain in Armor. He also served at the US Air Defense Artillery School and attended the Officers’ Field Artillery Advanced Course. He was an Airborne Ranger. He has a master’s degree from Harvard University. In civilian life, he was a senior corporate executive, County Commissioner, and Board member of a free clinic for the underserved.

He was a group leader and substitute teaching leader in Bible Study Fellowship. His many studies of Genesis and creation science led to the ideas behind “The World Before the Flood”.

John is married and has four children and seven grandchildren. He enjoys reading, Spanish, music, and weightlifting.

Connect with John at shooba6@yahoo.com