You are here: Home / Featured Books / The Vigilante Judge 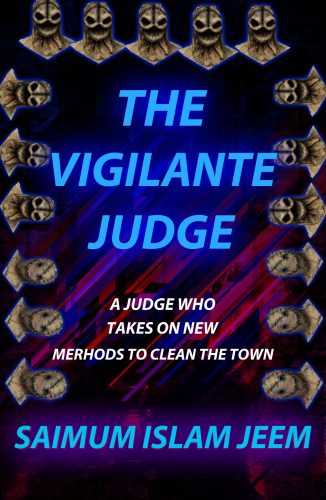 About The Vigilante Judge:

A vastly experienced judge, Ishtiak, comes to Presington Town, a town filled with lawlessness and criminals. James, another judge of the town, had tried all his might to bring justice to the town before Ishtiak’s arrival. But lack of evidence made him crippled for all cases and serial killers and serial rapists walked out unpunished. But upon the arrival of Ishtiak, criminals started to admit to their crimes at the last day of the trial. James started to become suspicious. And the town spread a rumor.

The masked man has taken over the town. Every criminal is afraid of him and he exhales excruciating pain and terror upon the criminals so much so that they confess at the trial. But how? They are in prison. Soon, everyone realizes someone from the inside is the masked man.

Various peculiar crimes evade the town upon all the chaos. Who will solve them now? Can the masked man solve them?

Saimum Islam Jeem, born in 2003 in Dhaka, Bangladesh, is currently a fresher at Military Institute of Science and Technology situated at Mirpur, Dhaka. At the age of 18, he published his first novel of a series called “Detective Khan’s Unforgettable Cases” named “A Suspicious Suicide.” Before this, he published stories and poems with Bangladesh’s reputed magazines and newspapers. This is his second novel called “The Vigilante Judge.”