You are here: Home / Fantasy Books / The Steel Hounds by Vladimir Vasilenko 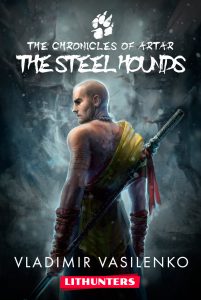 The Steel Hounds by Vladimir Vasilenko

Stan, also known as Mongoose, is an extreme traceur and a freerunner, whose real-life talents attracted the attention of The Steel Hounds, the most notorious and private clan of the virtual world of Artar, famous for serving the grey cardinal. While the political landscape for this new world is yet to form, intrigues, conspiracy, daring raids, and sabotage are the main weapons of the Hounds, and his evaluation has just begun.

To complete it successfully and become a full-fledged member of the clan, Stan will have to adapt to working side-by-side with the most unique people with shady backgrounds — even if he is not a team player by nature and has already failed at the very beginning by choosing the class least suitable for teamwork: Battle Monk.

Stan is rebellious, free-spirited, and daring. He risks his life every day just to avoid getting bored of the daily grind. Normally, an expelled student has no hope of entering the virtual world of Artar, an expensive online VR project, but when a suspicious organization offers to pay all expenses to let Stan in for a special purpose, Mongoose gets his chance to join the select few. However, to successfully complete his trial, Stan will have to face his main enemy — himself, while finding peace and mastering all five styles of the Battle Monks of Artar.

Buy the book, and follow the author on social media:
Get This Fantasy Book From Amazon.
Visit the Author’s Twitter page.

Author Bio:
“Vladimir Vasilenko was born in the far north of Siberia, where he still lives. An economist by trade, he has never pursued that occupation. Instead of financial reports and spreadsheets, his main calling became the written word, and on top of being a writer, he also worked several years as a journalist.

He began writing stories at the tender age of 7. At 13, Vladimir started working on two novels, and a few years later, they were picked up by the largest publishing house in Russia. Those novels that came about in the early stages of his writer’s career weren’t particularly remarkable: your usual sci-fi space action, but in the writer’s own words, “”they did give me the opportunity to hold my own books in my hands and believe that one day, I could become a successful writer””.

However, after an almost ten-year gap since his first childish attempts at writing, Vladimir learned about the LitRPG genre that was gaining momentum in Russia and gave it another go in 2016. An avid gamer himself, he started contemplating the possible significance of video games in a futuristic setting with the invention of technologies allowing total immersion. What was at first just a passing fancy quickly turned into a genuine fascination and he returned to writing.

Ironically, as a reader, Vladimir isn’t a big fan the LitRPG genre. His biggest pet peeves are Mary Sue protagonists, the excessive use of game slang, and the abundant overviews of character statistics. “”I just cannot stand it when fights are described as someone using a fireball and dealing 180 damage to the enemy,”” says Vladimir.

What distinguishes his works from other LitRPGs is their closeness to classic fantasy fiction. Instead of being generic accounts of someone’s power-leveling, Vladimir’s stories describe how the game becomes a second life to some people, opening up new opportunities, allowing them to discover new qualities, and sometimes putting them before difficult moral dilemmas. None of this, of course, takes away from battles, exciting quests, rare artifacts and other attractive things, irresistible to many gamers.

Chronicles of Artar by Vladimir Vasilenko is currently in full swing. The technology used in the world of the story is futuristic and highly developed, turning it into something more than a game, yet never depriving the reader from the feeling of adventure, which is the essence of the genre. “This is the world of my dreams, to which I invite my readers. See you in Artar!”