You are here: Home / Fiction Books / The Shadow of Troy (Empires of Bronze #5) 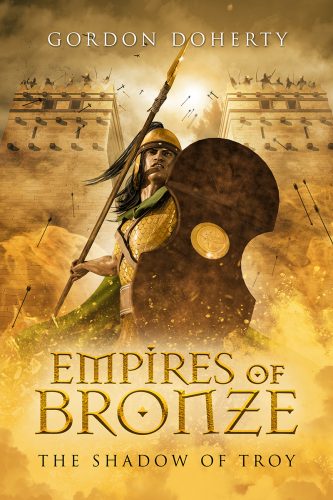 About The Shadow of Troy (Empires of Bronze #5):

The war at Troy has raged for ten years. Its final throes will echo through eternity…

1258 BC: Surrounded and outnumbered by the army of Agamemnon, King Priam and his Trojan forces fight desperately to defend their city. In the lulls between battle, all talk inevitably turns to the mighty ally that has not yet arrived to their aid. Agamemnon will weep for mercy, the Trojans say, when the eastern horizons darken with the endless ranks of the Hittite Empire.

King Hattu has endured a miserable time since claiming the Hittite throne. Vassals distance themselves while rival empires circle, mocking him as an illegitimate king. Worst of all, the army of the Hittites is but a memory, destroyed in the civil war that won him the throne. Knowing that he must honour his empire’s oath to protect Troy, he sets off for Priam’s city with almost nothing, praying that the dreams he has endured since his youth – of Troy in ruins – can be thwarted. All the way, an ancient mantra rings in his head: Hittites should always heed their dreams.

Author Bio:
I’m a Scottish writer, addicted to reading and writing historical fiction. My love of history was first kindled by visits to the misty Roman ruins of Britain and the sun-baked antiquities of Turkey and Greece. My expeditions since have taken me all over the world and back and forth through time (metaphorically, at least), allowing me to write tales of the later Roman Empire, Byzantium, Classical Greece and even the distant Bronze Age.