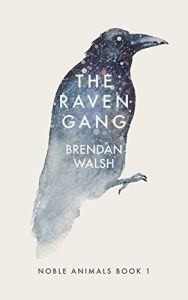 Either they’re living their own adolescent adventurous fantasy or witnessing the dawn of a supernatural invasion. Whatever it is, college student Patrick Buchanan and his friends unwittingly fall to the core of a rogue geneticist’s plan to reshape the world. Once they’re framed for an esteemed philanthropist’s murder, they must work together to uncover the man’s end game while digging into their own unpleasant pasts. But what’s the point of adventure if you don’t make friends? Whether human or not.

Author Bio:
Originally from Glendale, California, I graduated from the College of Wooster with a B.A. in English in May 2017.

Since then, I’ve gotten a publisher for my novels. City Lights Press has published Immortale as well as what I have of the Noble Animals Series so far. The Serpent League was just published, so take a look at that one after you’ve checked out The Raven Gang!

I’m currently trying to get a new publisher or even an agent for my next novel, a high fantasy called The Century’s Scribe. I hope to one day make a living off writing, but I still have many words to write before that has a chance at becoming a reality. I am also a philosopher, animal freak, recreational madman, and a big Dodger fan.