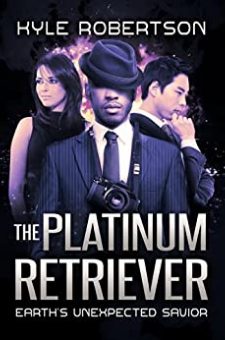 About The Platinum Retriever: Earth’s Unexpected Savior by Kyle Robertson:

A Private Investigator has to Investigate a Very Different Case This alien invasion tale has a very different premise. Yes, they have xenomorph DNA, but they were indigenous to Earth. This adventure gets much deeper than the normal. Daedalus Platinum was a private investigator for children who never received their child support. The reason for his diligence was his father died before he was born, and his mother died during his childbirth. This made him an immediately orphaned only child. His parents never got a chance to care for him, so why should a living neglectful parent have that choice? One day his police contact sopped helping him. He found out why. There was a much more important police matter at hand. People were being disintegrated! Detective Sandoval told him to stay out of it, but if this disturbance was stopping his only lead giver, he had to participate. He had to get his leads in order to eat. What he discovered went way deeper than a routine murder case. The people were being disintegrated by aliens! Well, not aliens. Xenomorph/human hybrids was more appropriate. Follow Daedalus Platinum, Detective Barret, and Detective Sandoval on a wild adventure of saving Earth in The Platinum Retriever: Earth’s Unexpected Savior.In this science fiction alien invasion thriller, you’ll get:Wild action, intrigue, and adventureAnother concept of aliens invadingMartial artsAn ethnic mix of heroesElements of death and bereavement to drive the storyCertain military aspectspFind how these heroes battle the Arizona heat, and world domination in The Platinum Retriever: Earth’s Unexpected Savior