You are here: Home / Fantasy Books / The Patient by Linda Thackeray 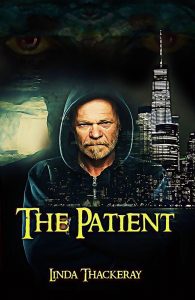 The Patient by Linda Thackeray

They say that a long time ago when elves and wizards existed, the land was ruled by kings. Heroic warriors roamed about, protecting the people from evil. These were said to be just stories, just tales told to young children to make them believe in magic.

Dr. Dan Ellis does not believe in magic.

When Dan is called on to treat an amnesiac patient named Moses, he embarks on a strange journey with very dangerous stakes. Moses constantly refers to him as War Dragon, a clear sign of his delusion, according to Dan. But when he meets John Malcolm, a tycoon who is determined to gain possession of Moses, Dan discovers that there’s more to Malcolm than meets the eye. In fact, he is a dark lord from ancient times, one that was resurrected.

Dan, with the help of a trio of elven brothers and Detective Anna McCaughley, start a quest to defeat John Malcolm before he can re-establish his kingdom of darkness in the modern world. Along the way, Dan finds out about his own past, and how his destiny is entwined with others.

Author Bio:
Born in a village in Malaysia and delivered by underpaid midwife, and Ann, an irritable new mother (who wouldn’t be after 48 hours in labour?), X was named by a deranged grandmother with too much creativity for her own good. Once out of her pain-induced stupor, Ann decided to give her new daughter a proper middle name to avoid the risk of being put into a home later in life.

And so, she was called Linda.

Linda was an unremarkable child, save a few notable incidents, the discovery that a pot lid is not a substitute for Wonder Woman’s tiara (five stitches), four-year old don’t need to shave (no stitches but lots of toilet paper) and utility truck drivers are not necessarily qualified operators of their vehicles (seventy stitches).

At eight, Linda received religious enlightenment when she saw Star Wars at the Odeon Theatre and hence began her writing career.

For many years, the cages of various pets in the Thackeray household were littered with pages from Linda’s scribblings. Subjects usually ranged from whatever science fiction show was on television or at the movies. There was lots of Star Wars.

At 17, Linda moved to Sydney, Australia and was disappointed it was not occupied by Paul Hogan types with big knives and croc skin jackets but pot-bellied blokes with zinc cream and terry towel hats. Linda’s father (also known as that bloke who buys me stuff to piss mum off when she’s mad at him) settled in the town of Young, a community of 6000 people with no movie theatre.

Linda survived this period in the wilderness by raising kangaroos and writing original works but eventually got saddled down with the necessities of life and though she continued to write, work came first. Work, HBO, comic books and rent. It’s a kaleidoscope.

Even the kangaroos left out of boredom.

Supported by two cats named Newt and Humphrey, she spends her days trying to write novels while having unclean thoughts about Michael Fassbender and Jason Statham, sometimes together.