You are here: Home / Children's Books / The Mysteries at the Vanished Villa 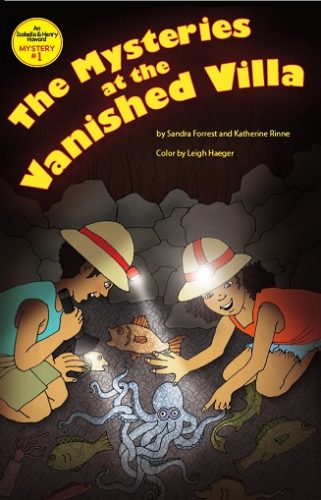 About The Mysteries at the Vanished Villa:

Twins Isabella and Henry Howard have spent the last few summers at Misenum, Italy, on the Bay of Naples with their parents Carol and David. Misenum is an archaeological site where their parents hope to discover a lost villa that belonged to Pliny the Elder, a Roman statesman and admiral who died during the eruption of Vesuvius in 79AD. The villa has never been located but Carol and David think they have found it.

The twins make amazing discoveries of their own; ones that will change the course of the excavation. They think of themselves as “dirt detectives,” but this summer they also become real detectives when they uncover a nefarious plot to steal ancient Roman antiquities. With the help of trusted friends, Guido and Stefano, and their parents, they help the Italian Art Squad capture the crooks and recover the stolen art.

Author Bio:
Kathrine Rinne is an independent scholar of Rome’s fountains and aqueducts. She has published widely on this topic, including her book The Waters of Rome: Aqueducts, Fountains, and the Birth of the Baroque City, Yale University Press, and the mid-grade novel Francesco’s Fountain with Sandra Forrest, Four Fountains Press.

Sandra Forrest has illustrated over 50 children’s books including Fanny McFancy: A Passion for Fashion, Simon and Schuster, winner of the Parents’ Choice Award for Illustration. She was also an art teacher and an art director for children’s publishers including Golden Books and Weekly Reader.