You are here: Home / New Books / The Infant Conspiracy: Revised (The Generations of the Oberllyn Family Book 1) 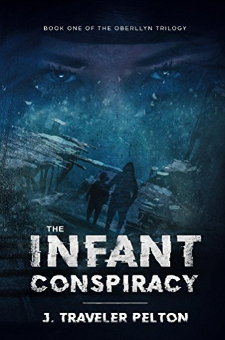 About The Infant Conspiracy: Revised (The Generations of the Oberllyn Family Book 1):

Noel and Violet Oberllyn spent their adult careers working special ops for the U.S. government, which was a family tradition, going way back. After forty years of it, all they wanted was a peaceful retirement in the country. Just as it seemed that dream might happen, a planned series of events forced their over achieving adult children to return home to live with the folks – all four of them with spouses in tow, each driven from their homes by different aspects of a government that had gone crazy. Kai, a geneticist, with Zyanya his wife, Gabriel, a bomb expert turned nurse with their grandson little Gabe, Jasmine, a forensic psychiatrist married to Scott, a CPA, join their little sibs still living at home, Micah, an autistic savant and Serena, an artist, in uncovering a secretive group of people led by the Ice Lady whose main goal appears to be to take the earth’s population down from 7 billion to 500 million within the next 10 years. Having infiltrated the governments of most developed countries, and having released an airborne anti-fertility virus that rapidly spread across the planet, the Brotherhood succeeded in forcing a zero fertility rate. In the meantime, the economy of the U.S. tanked, the government sells all citizens who have debt into slavery within a system so harsh that civil disorder breaks out. Serenity Retreat Center is forced to become a slave labor camp and the family is forced back into special service to save the Center, their tribe, the United States and humanity from destruction. This was not going to be the quiet retirement they planned….

J. Traveler Pelton was born in West Virginia in the last century. She lives on a small farm with her husband, alpaca, chickens, Pomeranians, canaries and tolerates T-Bears Siamese cats and parrot Giz. She loves to find out what all her friends are studying. She was the Nation’s Mother for her tribe for several years: she is still wife to Dan after 47 years, mother of six adults, a grandmother of eight, a great-grandma of 1, a Clinically Licensed Independent Social worker, a retired adjunct professor of social work at her local university and an avid reader. She studies science, technology, Biblical studies, and human behavior. She is quick to draw parallels between different fields of thought and weave the ideas into a cohesive ideology that is at once practical, usable, and thoughtful. Her books are the result of blending her life experiences with bureaucracy, studying science and nature, counseling, and faith. She greatly enjoys the intersection of fantasy and possibility and hopes you enjoy it as well. We will see you on the other side of the imagination tree.

Her co-author of the Clan Falconer fantasy series is her grandson T-Bear. T Bear Pelton is a self-proclaimed gamer, a Christian active in his home church, a Native American, a storyteller, and a novice blacksmith. He lives with his grandparents, his Amazon parrot, and four Siamese on a small alpaca farm while working full time and dreaming of times when magic still existed and wishes sometimes actually came true. Enjoy this fantasy with him and for just a little while, suspend daily life for a dream of dragons and wizards, beautiful ladies and knights, magic and faith. Travel then with us to another time, another place, and another dimension. Come to the future, after the War, when tech and magic combine with faith and fear.