You are here: Home / Featured Books / The Great Divorce by David Loy Frishkorn 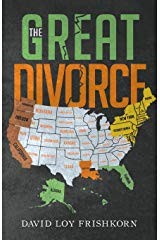 About The Great Divorce by David Loy Frishkorn

In a world of political division and thinly-veiled racism, the policies and personal behaviors of President Alexander Haight take our nation to the brink of dissolution. What role will the Lasserman brothers play in the turmoil and healing process? They both take very different paths exposing the flaws of white-washed ignorance and naivety over deeply-rooted racial feelings and beliefs.

Author Bio:
After a forty-year international business career in the so-called ‘real world,’ David Loy Frishkorn is launching his second career in the exhilarating and liberating world of adult fiction and political intrigue. His real world career took him all over the world meeting fascinating individuals and experiencing various cultures, cuisines and characters. He now builds on some of those characters and experiences in the pages of ¬ The Great Divorce.
DAVID LOY FRISHKORN is a native of Pennsylvania and a graduate of Slippery Rock University, Rochester Institute of Technology and Bentley University. In addition to Pennsylvania he has lived in Florida, New York, Massachusetts and Connecticut and now resides in Tampa with his spouse of thirty years.