You are here: Home / Featured Books / The Girl In The Manor by A.J. Rivers 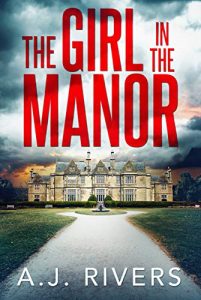 The Girl In The Manor by A.J. Rivers

The sound of a blood curdling scream echoed through the manor.
Her pleas ignored, her screams unheard. Tomorrow would not come for Everly Zara…
What does the death of a young child, and the sudden death of the girl in the manor have in common?
Was it simply just a coincidence, or is there something far more disturbing than anyone could ever imagine?

Everly Zara, a beautiful young woman, is found dead in the bedroom of the manor. The bedroom which she shares with her new fiancé.
She is naked and hanging. Her ankles are bound. There are words written on her body.
The news is shocking and disturbing to everyone who knows her.
Could Everly no longer bear the sadness and guilt of the little boy’s death, and killed herself to escape it?
But the heartbreaking death of a beautiful young woman accused of a horrible act may not be as straightforward as everyone thought.

The further Emma dives into the case, the more she realizes, everything is not as it seems.
As secrets from Everly’s past rise to the surface and the shocking nature of it discovered.
Emma must unravel the truth before she becomes a victim herself. In the close-knit town of Sherwood, something or someone is coming for Emma Griffin.
With her past constantly haunting her, and the disturbing nature of this mystery. Nothing is what it seems, yet everything feels so familiar.
Emma is left to wonder if she is really losing her mind.

The Girl in the Manor is the third book in the Emma Griffin Mystery series, it can be read as a standalone.

Buy the book, and follow the author on social media:
Get This Thriller Book From Amazon.

Author Bio:
A.J. Rivers loves all things mystery and thriller. Growing up in a sleepy small town, A.J. spent her days enthralled in crime solving novels and movies. She started creating stories at a young age to escape and create adventures for herself. As a child she dreamed of solving crimes and becoming a crime fighter. She dreamed of being as great as her favorite crime solving character Sherlock Holmes. While in college she realized that leading a crime fighting life might be more gruesome than she could stomach. She decided that the best course of action would be to fuse her love of writing with her love of thrilling mysteries together.

She finds inspiration from researching true crimes and is passionate about writing suspenseful novels with crazy twists. Twists that you’ll never see coming. The inspiration for her first novel came when she read a news article about a missing young woman in a small town that was never found. Her question on who, what, and why brought her to her journal to discovering the dark twisted story behind the disappearance and to seek justice for the victim through her writing.

Her thriller novels have elements of mystery, suspense, and romance.
When she’s not absorbed in a novel or working on her next thriller mystery, her favorite past time is spent with her husky. She finds great inspiration while going on hikes with her dog.