You are here: Home / LGBT / The Gift That Keeps on Taking 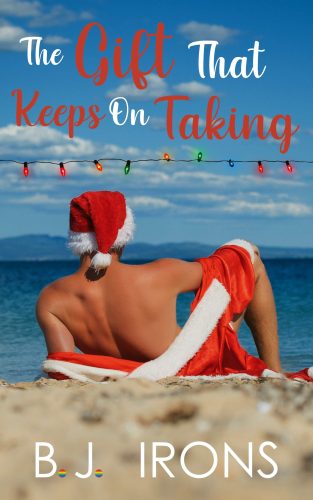 About The Gift That Keeps on Taking:

First, he took away my coming out moment.
Next, he took my scratch-off and won $77,777 for himself.
Then, he took my first boyfriend away from me.
Despite how crazy he drives me, I am still obsessed with thinking about him. It’s sick!
Christian Delgado is the gift that keeps on taking.

The Perkins and Delgado families meet on the weekend between Christmas and New Year’s annually at their joint single-family home in Rehoboth Beach, Delaware. This long-standing tradition has become an annoyance to Liam Perkins, a high school senior, who is still in the closet to his family. Liam is forced to have to hang out with the Delgado’s son, Christian, during this yearly holiday get together.

Everything about Christian annoys Liam. From his suave looks, to his popularity and athleticism, and even his laid back, carefree personality. On their most recent Christmas family vacation, Liam planned to come out to his parents, but somehow Christian managed to make that night all about him, too.

Liam has had to put up with Christian taking everything from him and he is determined to somehow put a stop to it. But little does Liam know that Christian has kept some secrets about him for years that will soon surface, causing Liam to second-guess all of his former opinions about Christian Delgado.

Author Bio:
BJ Irons works in the field of education. Many of his personal experiences as a gay man, have contributed to his works. Being a part of the LGBTQIA+ community himself, BJ hopes to continue to bring more fun fictional works to his LGBTQIA+ readers. The world could always use a little more color and fun.