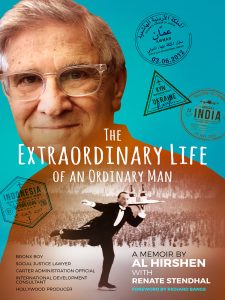 Al Hirshen has led an unusual life. He learned street smarts in the Bronx, helped out at his father’s candy store, worked as a waiter in the Catskills to pay for his schooling, and became a lawyer. A participant in many of the pivotal changes of our times, Al was a Civil Rights and pioneering anti-poverty lawyer and created the first public/private partnerships in the Carter Administration. He was among the first USAID consultants to work in Russia, Ukraine, Slovakia and Albania.

Al has traveled the world, was a successful international development consultant, and tried his luck at movie production in Hollywood. For nine years he worked as a consultant to the leadership of Indonesia during that nation’s turbulent transition to democracy.

This book is on sale today for .99 cents.

Buy the book, and follow the author on social media:
Get This Memoir Book From Amazon.
Visit the Author’s Facebook Fan Page.

Author Bio:
Al writes with a sense of humor and a profound love of life, the world, and people. As a recovering alcoholic, father, grandfather and husband in a happy twenty-five-year third marriage, he sees himself as an “ordinary man” blessed to live life fully in an imperfect, yet stunning world.