You are here: Home / New Books / The Cursebound Thief 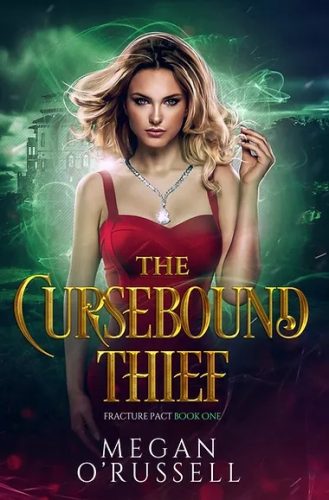 The world wants a hero. The curse needs a thief.

The party of the decade stands between Jerek Holden and saving the people he would do anything to protect. After twelve years, he’s finally found a way to break the curse that ripped all magic from the world and destroyed the peace that took generations to build. All he needs is one, simple artifact. But he can’t steal the heliostone alone.

A girl with a soul of fire.
A vampire bound by a vow.
A werewolf bent on revenge.
A knight torn between honor and duty.
A hacker to keep them all alive.

The fate of magic lies in their hands―if they can survive long enough to pull off the heist of the century.

Megan started writing when she discovered playing Cordelia in King Lear leaves you way too much time waiting backstage. She began her career as an author during an ill-fated trip to Oz. She hasn’t stopped writing (even when living on a tour bus) since.

Megan’s wanderlust has led her all over the globe. When she’s not planning her next escapade, she’s diving into fantasy worlds where she doesn’t have to worry about what rules she’s supposed to follow or how many pairs of socks she can fit in her suitcase.

Her love of storytelling has helped Megan weave her real-life exploits into seven different book series. From the epic fantasy world of Ilbrea to the paranormal dystopian romance of Girl of Glass, there is always is a new way to escape into adventure.

Megan would love to connect with you on Instagram, Twitter, Facebook, or TikTok but feels obliged to warn you in advance that you will be hearing about her cats…a lot.

If you want to stay up to date on all Megan’s books and adventures (and hear about her cats) you can find all her social media links, including where to sign up for her readers community at: https://linktr.ee/meganorussell