You are here: Home / Featured Books / The Bully by Wiley K. March 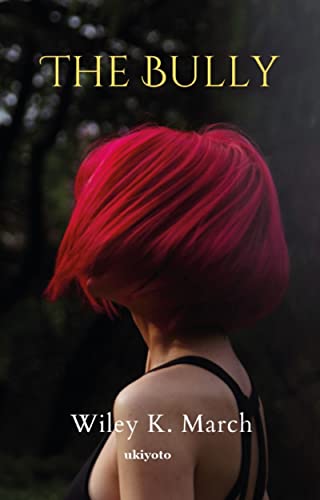 The Bully by Wiley K. March

Never safe for a moment, she learns from too young and tender an age, that she is all alone in a cruel and hostile world, where even those who were meant to be her protectors are her enemies. Sold, beat down, and abandoned, a young girl struggles to survive against all odds, struggles to find balance and peace between anger and indignation.

The reader encounters Carissa Locke near the end point of her eighteen year journey as she lay in a bloody heap recalling the shattered life that led her down a path from which there may not be a way to redemption. The fierce defiance and violent temper that has saved her life again and again, may well prove to be her undoing during a police investigation that will decide whether she is to be charged with the attempted murder of her lifelong friend Danielle.

While Carissa is a hard person, she is not a difficult person for which to find empathy. Many difficult and painful choices brought her to the this moment in her life and it seems to have been the inevitable outcome. But as the story twists through her wiles, manipulations and brutal acts of violence, one comes to understand and embrace the wounded child within who was fighting desperately for the right to live, to be heard, to be loved. She is also a soul who stands up, who fights back for others who are abused like her, but is she helping them, or is she manipulating them to meet her own ends? Is she so different from those she has despised, whose demise she has plotted in one way or another?

Time cut far too short with those who had loved her, helped her, but were always ripped away from her too soon. But did they leave behind enough love, enough lessons to save her from a cruel destiny that seems bent on her death before she even gets a chance to live?

In search of deliverance, for forgiveness, desperate to believe she is a person worth saving, or that there is anything of her at all that is more than a war child. Carissa’s soul searching, her introspection, leading us back to where we found her, self pity seeping away with the realization that the rage and loathing she had visited upon the world, the weapons that had saved her life would be the very ones that led her to this precipice of self-destruction.

As her best friend lay dying, Carissa will do anything to heal the wound of the fight that has ruined their friendship and may ultimately cost Danielle her life and Carissa her freedom. In her grief over what she has done, Carissa implores Danielle’s forgiveness, learning that Danielle perfect veneer has been a lie all these years, she has soul-shattering secrets of her own. Carissa has only just begun the inner battle against the Bully she has become. She has realized the most dangerous enemy any of us will ever face is ourselves.

Get This Fiction Book.

Wiley K. March was born in 1971 and grew up traveling. Her parents divorced when she was young, and her mother’s mental health crises left her responsible for her younger siblings.

Her first stories were comical adventures written to entertain her siblings. Further inspired by her junior high school creative writing teacher, she began to write more elaborate and mature stories inspired by the experiences of the people around her.

Initially after high school, Wiley intended to study journalism but changed her mind and turned instead to teaching and volunteering with troubled youth in various capacities. However, the blank page kept calling to her and she returned to writing.

Though her books incorporate horror and science fiction, there is an ever-present ring of truth to every single character and every element. Ms. March’s characters face moral dilemmas, they have secrets, and they have internal and external struggles. Just like you!

Ms. March lives in NYC and is currently working on her second novel.