You are here: Home / New Books / The Boy with the Spider Face 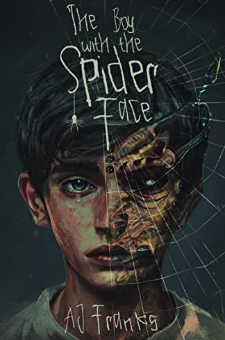 About The Boy with the Spider Face:

A transformative science fiction and horror novella about acceptance, reflection, and revenge.

Jeff Pritchet isn’t much different from other teenage boys, with one exception. His monstrous, spider-like appearance and loner persona make him a target for bullying, when all he wants is a friend who sees beyond the surface.

Enter transfer student, Aarav Jain. Thoughtful, accepting, and insightful, he sparks an untapped hope in Jeff, transforming his life. But as the boys grow closer, their deepening relationship becomes hijacked by a darkness Aarav can’t escape and a life-altering secret Jeff can barely contain.

The unconventional pair find themselves marked for hatred, and when his bond to Aarav is threatened, Jeff discovers a sinister side he never knew he had, proving that, when pushed too far, emotions can be deadlier than venom.

Proudly represented by Crystal Lake Publishing—Tales from the Darkest Depths.

AJ Franks is an American author and playwright. He has authored more than thirty short stories, including “We All Scream” which is featured in Shallow Waters Volume 6: A Flash Fiction Anthology by Crystal Lake Publishing.

He wrote the stage play, Bereavement, which debuted at the 2015 Fertile Ground Festival and was a semi-finalist in FiLMLaB’s 2013 Script-to-Screen contest with his original short screenplay, Sometime Over Coffee. He is a member of the Horror Writers Association and currently resides in Portland, Oregon.