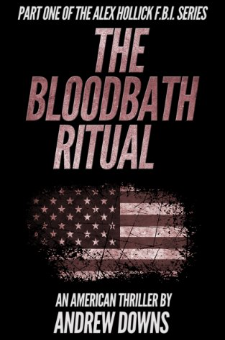 About The Bloodbath Ritual: An American Thriller (The Alex Hollick FBI Series Book 1):

The Bloodbath Ritual begins a thriller series like nothing else in its genre!

What readers are saying about The Alex Hollick FBI Series!

“A great story, will keep you glued to your kindle for hours.”

“The story was intense and gripping and the character development was amazing.”

“Brings something new and fresh to the table.”

Alex Hollick is a clean-cut robbery division agent in Los Angeles, paying his dues, putting in his time, but his steady climb up the FBI ladder is about to take a major detour. Half of his team is killed in an unauthorized sting operation. The situation worsens when Hollick learns of the internal corruption that helped shape the deadly event.

At the order of his trusted mentor, John Novak, Hollick travels to Virginia, unknowingly as a suspect. A CIA torture team lies in wait, planning to kidnap Hollick and squeeze the truth out of him. After a torturous, drug-induced series of mind games, Hollick is released to Jordan Clay; head of a clandestine group burrowed deep within the FBI. His orders are simple – Bury the truth about the SOCAL robberies…

But things become more complicated from the moment the cover-up begins. Blood spills in all directions as Hollick and Novak attempt to hide the truth. Arson leads to a cop killing in the Mojave Desert. An ambitious Internal Affairs Agent is on to the corruption, and two-million dollars in missing robbery money sits in the lap of a beautiful, but troubled young widow.

As the danger escalates, Hollick concocts a seemingly perfect plan to protect the woman of his dreams, Agent Jennifer Fletcher.

Back in Washington, Clay has big plans for Hollick. A career in homicide waits, investigating religious crime at the height of the Satanic Panic of the 1980’s. Feeling confident that his plan has worked, Hollick begins his first case, The Halloween Murders – A double-homicide marked by a satanic signature. Hollick soon realizes that his prime suspect is a scared eyewitness and that the true killers are sabotaging his investigation.

While Hollick struggles to close in on the killers, John Novak has made some plans of his own, to find and destroy the one piece of evidence keeping Jennifer Fletcher alive.

Are you looking for a unique, original, pulse-pounding thriller series? Download a sample or buy The Bloodbath Ritual today!

Since the release of his 2012 debut, The Bloodbath Ritual, the consensus has been clear…Andrew Downs brings something new and fresh to the thriller genre. From the five-part Alex Hollick Thriller Series to his latest offerings, The Leah Hudson Thrillers, each book leaves the reader gratified, yet hungry for more. With elaborate plotting, intense storytelling, three-dimensional characters, and jaw-dropping endings…the only thing you can expect is a satisfyingly complex and entertainingly atmospheric story.