You are here: Home / Featured Books / Talon, come fly with me by Gigi Sedlmayer 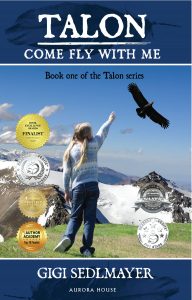 About Talon, come fly with me by Gigi Sedlmayer

Talon Come Fly with Me by Gigi Sedlmayer is an inspirational,engaging and thoughtful must read story. It follows the story of a little nine year old girl whose parents are missionaries in the small village of Pucara, Peru. Matica, finds making friends with the local kids to be difficult. Matica has a condition that has hindered her growth, so she is extremely small like that of a two year old. The local Indians and villagers, don’t understand her and are leery and mistrustful of her.
Then Matica comes upon two condors, a male and a female. She is able to win their trust and begins to mysteriously communicate with them. Her adventure has begun. The condor’s egg is stolen by poachers and Matica and her father set out to rescue it, and they are successful. With the condor’s approval, Matica takes care of the precious egg. When the egg hatches,Matica becomes a substitute mother to the baby condor and names it,Talon. The local’s observe the success Matica has had with the condors,and they begin to warm up to her. Eventually, tiny Matica, becomes a well-liked, admired and respected part of the community.
Talon, Come Fly with Me by Gigi Sedlmayer is filled with warmth and inspiration. It is a touching story about a nine year girl that overcomes her disability and uses it for something extraordinary. Her love for nature changes her life and it becomes meaningful and purposeful for her. Her disability is no longer a hindrance or something to be ashamed of.
Gigi Sedlmayer has woven a tapestry of beauty, harmony and excitement in her fabulous story. It is filled with intrigue and even some suspense. I loved it and couldn’t put it down and read it late into the night to find out what would happen next. It brought a feeling of serenity to my soul. I loved the tale of the giant magnificent condors, coupled with the human interaction. It is just a beautiful story that adults and children will both enjoy. It will be fully entertaining for the entire family.
I believe that Talon, Come Fly with Me should be a reading requirement in schools. It is full of emotion and love with important messages throughout. The exemplary descriptive writing had me on the beautiful scene watching on as the story unfolded. Gigi Sedlmayer is an excellent writer with a unique voice. This story is original, genuine and compelling. Artisan Book Reviews highly recommends it to all readers. It is a page-turner and a must read magical tale for everyone that likes clean, thoughtful and exciting reads about animals and extraordinary people.
BOOK 1: Talon, come fly with me
TOP10 FINALIST with AUTHORS ACADEMY AWARDS 2018
SILVER MEDAL AWARD with READERS’ FAVORITE in Children’s’ adventure 2018
Finalist with: BOOK EXCELLENCE AWARD, 2017
Finalist with: IAN Book of the year award 2017 – The Independent Author Network
Silver for BOOK COVER competition with Authorsdb 2016
5 star Review by Readers’ Favorite,
4 out of 4 stars review by Online Book Club

Author Bio:
Gisela (Gigi) Sedlmayer was born on 19 May 1944 in Potsdam, a suburb of Berlin in Germany.
Her family escaped to the West just before the infamous wall went up. They moved around in Germany until finally settling in Munich where Gigi studied architectural drafting and met Albert in 1965, marrying in December 1967. She worked as a civil drafts person in various private consultancies in Munich.
May 1975, Gigi and her husband moved to New Zealand. Because of language challenges, she started a handicraft business. As a specialty, she made colorful parrots of which she sold thousands in a few years.
May 1989, they became adoptive parents of twin girls from Fiji.
September 1992, they moved to Australia.
November 1993 Gigi was diagnosed with cancer. By the grace of God, she survived and seeing her husband writing the story about the adoption, she started to write short stories for competition since her English became increasingly better.
She entered them in competitions and often got very good reports back, which gave her confidence to go on writing. One day the idea for the TALON series came to her and she spent the next several years bringing the story and the characters to life.

Currently working on the sixth book, TALON, WINDSONG
and the seventh TALON, MYSTERY OF LIFE