You are here: Home / Fantasy Books / Tales of the Feisty Druid Omnibus (Books 1-7) by Candy Crum 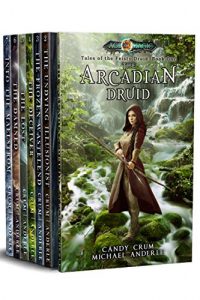 She missed the war, but she’ll be damned if she loses her chance for revenge.
Ten years after fleeing Arcadia to save her life, Arryn is all grown up. She spent the past decade in the Dark Forest with the druids, training in warrior combat and battle magic.

Now that Arcadia is safe and Arryn is more than capable of taking care of herself, she decides to go back in order to search for her father. The only problem is that the city she once called home isn’t safe at all.

Arryn knows she has to do what she was raised to do: fight.

She won’t rest until the wicked are dead and the innocents are finally able to rise from the darkness.

Set on the foundation laid by the Kurtherian Gambit Series, Tales of the Feisty Druid tells a new story in the Age of Magic–and of the heroes and villains who battle for control of its destiny.

Buy the book, and follow the author on social media:
Learn more about the writer. Visit the Author’s Website.
Get This Fantasy Book From Amazon.

Author Bio:
Candy Crum is a multi-genre author whose work ranges from YA to more adult titles. She is the author of the Eternal Series and all the books in the ESU (Eternal Series Universe) – including The Eternal Series, Time of Death Series, and the Memoirs of an Egyptian Goddess Series.

Candy lives with her two children and very chubby black cat, Korra. If you’d like to check Candy out further, please go to her website – candycrumbooks.com. There you’ll find links, news, and even more fun stuff.