You are here: Home / Mystery Books / Sweet As Murder 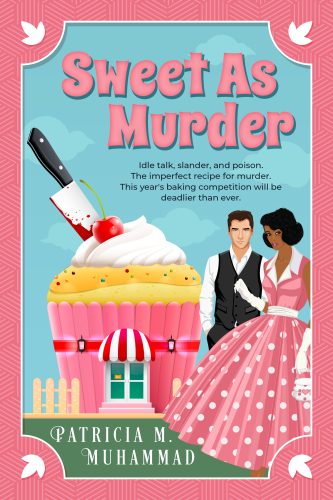 About Sweet As Murder:

Wilhemina is a coloured detective in 1950s Atlanta, Georgia. She is married to Charles, an Anglo-Brit. Lieutenant Carmichael sends her and Detective Arthur Dobson undercover at the Society’s annual baking competition to investigate a murder committed during the preliminaries. There is more at stake for than a blue ribbon prize. Wilhemina presents herself as a baker. Arthur is a judge. Dorothy is an associate of the Society and a contestant. She uses allegations of Communism to progress her way through the competition until she realizes that she has been socially disposed of by the Society. Dankworth notices that the baker Marceline plays with ‘light’. A vagrant outside the Society’s building is stabbed. He is more important than most would think. One baker is poisoned the first day of the competition. Another dies after engaging in a fight with a competitor. Wilhemina learns of this light and is able to communicate with Charles while he is at work. She realizes that the method of death in her cases is atypical. The detectives seem to be no closer to solving the case, until the winner of the competition is announced.

Author Bio:
Patricia M. Muhammad is an American fiction author of crossover contemporary romance/science fiction, science fiction/fantasy, mystery and historical romance genres. She has currently written 22 novels. She is currently working on her next book manuscript. Before penning fiction, Patricia emerged as an international legal history scholar and academic author, focusing on human rights, international law and restorative justice. She has currently written and published a combination of 23 research papers and academic book reviews in these subject areas. Her work has appeared in the American University International Law Review, Columbia Journal of Race and Law, the Willamette Journal of International Law and Public Policy as well as the New York History Journal. Her non-fiction writing has been cited dozens of times in various respectable academic journals.