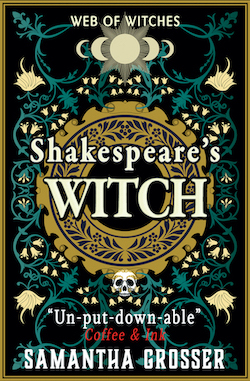 About Shakespeare’s Witch by Samantha Grosser:

England, 1606. A malevolent curse has been unleashed on the theatres and brothels of Bankside, and young witch Sarah Stone finds herself caught in its grasp.

A dark shadow haunts the playhouse, and when Sarah’s brother Tom seduces boy actor John Upton, John sees the hand of witchcraft in his own forbidden desires for men. Then Sarah weaves a spell to win another man’s love, and John begins to make his accusations against her.

As the first performance of Macbeth approaches, Sarah must find a way to convince John that his sins are his own – her life and the fortune of the play are at stake.

In a world where witchcraft is a crime, can Sarah find a way to save herself, or will the price be too high to pay? A dark tale of magic, illusion and desire.

Author Bio:
Samantha Grosser is a very British author who doesn’t function without tea. Having spent many years teaching English in Asia and Australia, she has made her home on the sunny beaches of Sydney, Australia, where she now lives with her husband, son, and a very small dog called Livvy. When she isn’t writing or reading (which isn’t often) you can find her either doing yoga, going for long walks, or watching old movies.