You are here: Home / Fantasy Books / Shadows of Time: The Amulet of Alamin 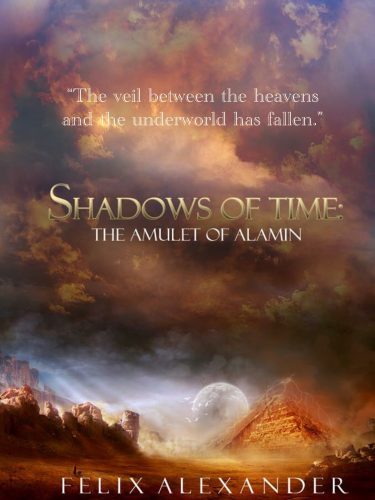 About Shadows of Time: The Amulet of Alamin:

The veil between the heavens and the underworld has fallen.

Mesopotamia is a region with kingdoms at war. The desires of gods and men sweep across the Land Between the Two Rivers so frequently that peace is merely a memory of a forgotten time. Demons and shape shifters lurk in the shadows, sorcerers and soothsayers warn of impending danger, and a demigod sits in the eye of the storm.

It has been millennia since the Tablet of Destinies fell from heaven. After the fall of angels and the emergence of the Watchers, the gods set out to destroy the Nephilim and retrieve the Tablet, but a piece of the stone chipped away before it was lost.

Fashioned from that piece of the Tablet, an amulet was gifted to Alamin in his infancy, but when he discovers the gods and angels want him dead he is forced to flee with it and only the Fallen Angel can protect him. Princess Safia is betrothed against her wishes and she flees with Alamin on a perilous quest across the Ancient World that blurs the boundaries of reality with the realm of myth until Alamin surrenders to the Fallen Angel.

Troubled by the prophecy, Inanna crosses oceans and deserts to find her son before she journeys into the underworld to retrieve his soul. The King of Kish names Sargon—the boy general—his Cup Bearer. Zagesi condemns his soul for immortality, but his deal with Mephitsophel is an ominous portent for the fall of kings. The fate of existence hangs perilously in the balance and the realm between the heavens and the underworld collapses into chaos.

Acclaimed by readers for his poetic prose, his indie releases have earned him praise and awards in various genres.

Being third-generation military, after a grandfather and uncle who served in the Korean War and Vietnam War, respectively, Alexander is proud of his service in the U.S. Army and grateful for his experience.

After his honorable discharge from the U.S. Army, his third year served in South Korea, he embarked on the long and arduous journey of a writer. Having made a name for himself during his tenure serving his country, he vowed to himself and his fellow soldiers that he would answer his true calling.

He lives in South Elgin, IL—to be close to his children—a son and daughter. He volunteers to promote literacy among youth with Villament Charities and the VM Mag (vmmag.org). In the evenings he journeys through the portals of his extensive, personal library. When he returns, he immerses himself in his writing, and pursues the scent of his muse.