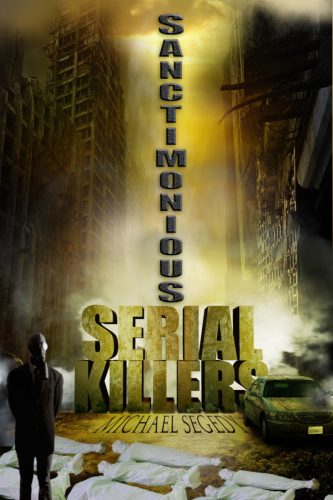 Sanctimonious Serial Killers is much more than a murder novel about serial killers. It is a gripping tale exploring the psychological and moral dimensions of aberrant minds convinced of the righteousness of their murderous deeds. It’s also a tale about mounting personal losses and their devastating effects on a human being’s life and belief system.

The story begins with Agent Rick Clark and his colleague, Marty Robin, investigating the murder of three women over a period of less than three years. When Agent Clark returns from investigating the latest serial killing, his colleague meets him at Reagan International Airport and delivers horrifying news that sends his life into a tailspin and the story to places where crime thrillers rarely go.

Michael Segedy’s crime novel certainly has its twists, its turns, and its surprises. It’s awash with all the elements of a great thriller, but it is far more than just an engaging crime novel. It’s a story about vulnerable souls pushed to the edge; about souls that crack and souls that cope; it’s a story with profound psychological and moral ramifications; a story about a hidden world of subterfuge and terror; a story that will keep you on the edge of your seat, captivate your imagination, and spare you from the cheap thrills and implausible events and characters common in lesser crime thrillers.

Finally, and foremost, it’s a starkly haunting, heart wrenching story about characters and events drawn from the real world, your world.

Michael is an award-winning Indie author whose writing has been inspired by living overseas in such faraway places as Peru, Morocco, Israel, and Taiwan. Apart from writing a dozen novels, including thrillers, young adult, and science fiction, he has published numerous academic articles about literature and writing, and in 1985, Gwendolyn Brooks, poet laureate of Illinois, presented him with Virginia English Bulletin’s first place writing award.