You are here: Home / Action & Adventure / Ri-iha-mo, Celestial Mountain Goddess: True Encounters with a Legend of the Himalayas by M.G. Hawking 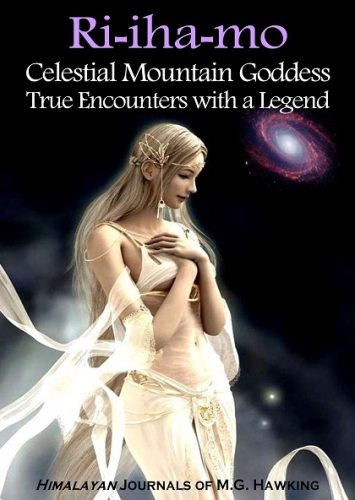 About Ri-iha-mo, Celestial Mountain Goddess: True Encounters with a Legend of the Himalayas by M.G. Hawking:

Free on Amazon December 15th thru December 18th. Journey into the reality of an ancient legend through this unprecedented first-hand account to explore knowledge that for long millenniums has remained concealed under layers of myth, legend, and secrecy. 5-star reviews: “A beautifully written account … a most highly recommended book.” “Thought provoking and beautiful.” “Insightful … reveals worlds we have long forgotten.”
Throughout Nepal, Tibet, Bhutan and the mountain regions of India, there has endured an extraordinary ancient legend of “mountain goddesses” or “celestials” who, having arrived in antediluvian times, still dwell in a concealed inner region of the vast wilderness of the Great Himalayan Range.
Transcribed directly from the archived field notes and journals of explorer M.G. Hawking’s experiences in a closed and largely unexplored region of the Himalayas, this book contains detailed descriptions of three encounters Hawking and his companions experienced with what they believe were those fabled Himalayan Ri-iha-mo, providing first-hand accounts of the remarkable knowledge they revealed.
Who, or what, are the Ri-iha-mo? The creation stories of ancient civilizations worldwide relate that their progenitors came from the stars, the sky, or the heavens. Native Americans recount that their antecedents were the “Sky People” or “Star Beings.” The builders of Teotihuacan describe their gods as having descended from the heavens. Egyptian texts speak of their “bringers of knowledge” coming from Sahu and Sopdit (Orion and Sirius). The pre-Tibetan Zhang Zhung, the Maya, the pre-Incans, the Sumerians, and so many others, all express precisely the same story in diverse symbolic languages—their ancestors came from the stars, bringing advanced knowledge and the gift of civilization. These cultures were greatly separated both geographically and chronologically, yet their creation stories are strikingly similar. What could explain this?
The voluminous lore of the ancient Brahmaic and Egyptian traditions relates that in the antediluvian time of zp tpj (generally transcribed as Zep Tepi), the “first occasion” or “first time,” mysterious, highly enlightened “gods” appeared in Egypt, bearing previously unknown technology and knowledge. The texts inscribed on the walls of the Temple of Edfu in Upper Egypt contain explicit descriptions of the time of Zep Tepi and the coming of the “bringers of knowledge,” recounting their arrival in a “cosmic egg radiating colored light,” bearing the “gods” who brought the gift of civilization to Egypt, the primary of which was Ptah, whose rule, the texts tell us, began circa 18,000 BC.
During Hawking’s and his companion’s second and third encounters with the Ri-iha-mo, they disclosed profound revelations about our universe, our planet, and our true nature, revelations that can greatly assist in understanding ourselves, our world, its history, and our role and power in creating precisely the life we desire.
A truly incomparable book for anyone interested in expanding their knowledge and personal power, and notably compelling for anyone interested in exploring the realities behind the ubiquitous ancient legends of celestial beings. Thought provoking and richly enlightening, this book will remain in your heart and mind long after the last words have been read. E-reader page count 328 (estimated, actual count varies depending on the reading device used). For more information, please see the ‘Look Inside’ feature on the book’s Amazon page. Thank you.