You are here: Home / Featured Books / Revenge in Barcelona by Kathryn Lane 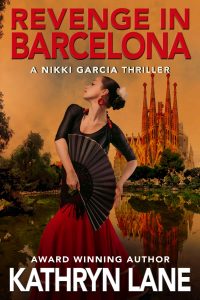 Revenge in Barcelona by Kathryn Lane

Nikki Garcia, former international fraud auditor turned private investigator, escapes to Spain with her fiancé after a death threat on her last assignment in Mexico. She puts the past behind her and turns the trip to Barcelona into her destination wedding. A week later, Nikki and the love of her life, Eduardo, find themselves caught up in a terrorist attack at one of the city’s major tourist attractions. As events unravel, Nikki discovers she is being stalked. Worse, she may have been the target of the deadly bombing.

In a foreign country, where the authorities are investigating a terrorist attack, they ignore that Nikki, an American woman, might have been the intended target. The newlyweds must navigate behind the legal and law enforcement systems to uncover the sinister person who seeks revenge against Nikki. Private investigators often encounter threats, but why would someone follow her to Spain?
To find out who has plotted against her, they consider international connections to people she encountered her past investigations in Latin America. Weaving their way through Barcelona in an attempt to get facts, Nikki and Eduardo further endanger their lives upon discovering a series of suspects, from flamenco dancers to foreign nationals. Will they be able to outsmart the would-be assassin’s attempts on Nikki’s life?

Kathryn credits her imagination to growing up in Mexico, a country which was rich in storytelling and steeped in cultural traditions. Her creativity was first expressed by painting in oils and when reality of earning a living set in, she studied accounting and finance, and joined a multinational corporation where she attained her dream job of traveling abroad.

After two decades in the corporate world and having visited over 90 countries, Kathryn left to fulfill a second dream – writing mystery and suspense novels.

Fans of strong female protagonists and suspenseful stories are likely to enjoy Kathryn’s work. The Nikki Garcia thrillers include:
Revenge in Barcelona – the latest release in the Nikki Garcia Thriller series.
Waking Up in Medellin – named Best Fiction Book of the Year 2017 by Killer Nashville.
Danger in the Coyote Zone – first place winner in the Action/Adventure category in Latino Books into Movies 2018. It was also a finalist in the Thriller category at Killer Nashville 2018. (Please note: This book will be RE-RELEASED in JUNE 2020).
Kathryn’s short story collection, Backyard Volcano and Other Mysteries of the Heart, was named Best Short Story Collection 2018 by Killer Nashville.

Kathryn and her husband, Bob Hurt, split their time between Texas and the mountains of northern New Mexico. They both enjoy the wildlife in magical New Mexico.