You are here: Home / Fantasy Books / Redemption of the Fallen 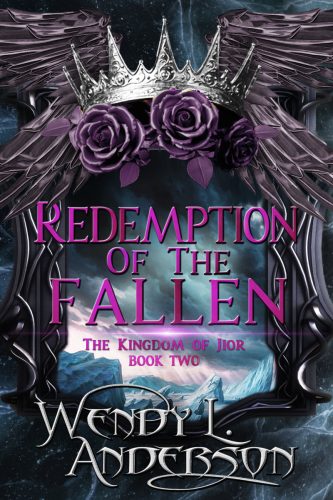 About Redemption of the Fallen:

Lorn is now King of Jior and Lililaira is his Queen and rules by his side. They learn that one hundred miles away from the City of Jior, the combined armies
of Vedt head towards them intent on slaying everyone and taking revenge on them for Lorn’s past evil deeds.
Five years earlier Lorn liberated himself from Lan-Loe, his evil father’s Red Sorcerer. Word had spread of the great battle between Lorn and a black-winged
demon and of Lan-Loe’s death. Now people have been flocking to Jior to make their homes there. A more glorious tale had spread of how Lorn, with only
one hundred men, had fought the demon-kind and cast them back to the underworld. Now war threatens everything they have built and everything they
love.
In the midst of impending war, strange dreams plague Lorn’s sleep at night. He feels that something is waiting, something he needs very badly, calls to him.
When he gives into that call, he learns that he is part of a race of winged people. He also learns about his past and is given hope for the future, but that hope
comes with a heavy price. Lorn is given a choice either relinquish his children to the safety of these new beings or risk their certain death at the hands of his
enemies. With the forces coming against them, Lorn and Lililaira are faced with a difficult choice.
First, Lorn must deal with the combined armies of Vedt coming to destroy them all. When Lililaira and their daughter are taken prisoner by her father, the
King of Skoria, Lorn must call on all his resources to get them back.
Forced out of the protective walls of Jior he must face his enemies who use his wife and daughter as bait and endanger his unborn son. King Lorn must deal
with old enemies and new friends but how to tell the difference?

Author Bio:
Wendy L. Anderson, is a Colorado native, wife, and mother of two grown boys. A devout reader of the classics, fantasy, sci-fi and historical fiction, she has
decided it is time to write down the fantasies from her own mind. Writing about everything from fantastical worlds to the stuff of her dreams she takes her
stories along interesting paths while portraying worlds she sees in her mind’s eye. Her goal is to deviate from common themes, write in original directions
and transport her reader to the worlds of her creation.