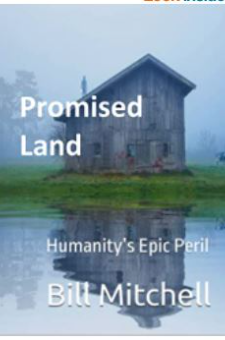 Jack Hawkins, popular Boston television meteorologist, knew for years that the worldwide economy was on life support. Hawkins, with his circle of closest friends map out a strategy to survive the coming catastrophic collapse on a rural dairy farm.
The larger problem is nobody really knew what the madman at the helm of Homeland Security, Everett Durkin, was up to. Disappearing scientists, savage murders and other unexplained events become the calling card of Durkin’s flying monkeys who are relentless to bring a greater darkness.
Hawkins’ own daughter, Alice, joins the ever-swelling ranks of the missing scientists. Will the group and their test of faith be sufficient to thread the needle, saving themselves and mankind?

Bill Mitchell grew up in New England where he resides with his wife and children, including a majestic German Shepherd, likely of the angelic realm.