You are here: Home / New Books / Pink Lines on a Dark Sky – A Clean Contemporary Romance 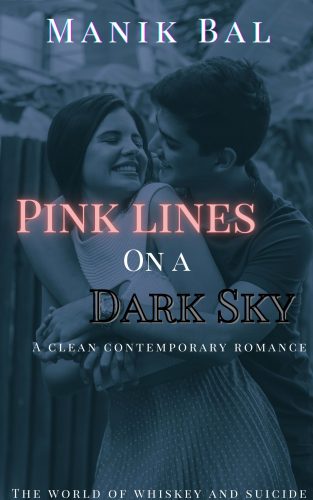 About Pink Lines on a Dark Sky – A Clean Contemporary Romance:

Rati, September 2001
“I do not want to go out today. I look at the pink paper that I have carefully folded and kept in the upper drawer of my study table. The paper has a poem, I think it is about me. It is about a girl whose smile is out of the world. Is that guy a weirdo? Who writes poems at the age of eleven? Who even writes poems nowadays? But he is cute, and super serious.”
Samay, January 2008
“I know she is lying. I do not mind. I know she wants to be seen as a strong person. And strong people do not cry. But we writers know. The real strong person does not mind crying. In fact, the real strong person cries often, shares the pain of the other people, making it their own. But I let her lie, because she is being honest, as she always is.”

Rati, July 2009
“That’s what everyone thinks when they are young. You need money, it is a reality. Everyone starts with a very optimistic view of the world, but then disillusionment hits fast, and it is too late by then. In my opinion, even being a plumber is better than being a writer. Besides, you will have to spend your life alone. No sane girl would marry an author.”

Samay, August 2010
“She is like that. Impulsive, dominating, endearing, talkative, beautiful – adjectives end when you start describing her. Descriptions are not meant for people like Rati. They are what they are, ethereal and otherworldly.”
He is a writer. She is an engineer. He writes poems to her. She teaches maths to him at lunch.
They know each other since they are eleven.
They think they have problems. They just don’t know what’s coming.

In September 2010, their world turns upside down. Will they survive the biggest crisis of their lives?
A part of the World of Whiskey and Suicide, a world populated with the characters that you met first in “Whiskey and Suicide”, a world of middle class Indians, who lead a mundane life, till something makes them do something heroic, or villainous. The world contains romances, heartbreaks, mid life frustrations and joy, friendships, ambitions and heartburns, and a vast kaleidoscope of emotions that are pastel color.”

Author Bio:
Manik Bal is a bestselling multi-genre author of “Whiskey and Suicide” and “Brothers Sen Gogh”. Manik writes emotionally rich and thoughtful stories about Indian middle class, their dreams and their struggle. Reviewers and other authors have compared Manik’s work with Jhumpa Lahiri, Alice Munro, Kodavatiganti Kutumba Rao and Raymond Carver. His characters explore life in situations that are not heroic or exceptional but are mundane and ordinary. They show their uniqueness by facing life as it is.