You are here: Home / Featured Books / Patty: A Woman of Substance by Fatima Myerson 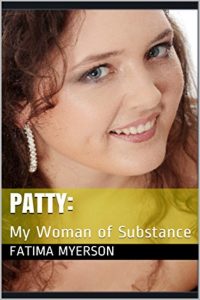 Patty: A Woman of Substance by Fatima Myerson

Patty is a big girl. At 5’11, when in heals, she was taller than a lot of men. It did not help that she was fat. At least she felt fat. Her derriere was bigger than normal. She often felt men pinching her bottom on the packed subway. It made her furious. She would twist her head around and gave an evil glare at all the men behind her. This would arrest the nasty forwardness of the culprits. But when Mitchell Carter went much further, she did not want to look around. She was enjoying it! Puzzled at her crazy acceptance, she fooled herself into believing this was her “Masked Man” as in the Mae West film. They, she and her stranger, had a unique secret; and it was exciting and fun!

Buy the book, and follow the author on social media:
Get This Romance Book From Amazon.
Visit the Author’s Facebook Fan Page.

Author Bio:
The author loves to read. She loves to write stories based on her life experiences. She loves to show people how great they can be. Her books are based on this premise. She holds a Masters in Publishing, and is an entrepreneur. She had built a Web business as a publisher over thirty years ago, just at the beginning of the commercial Internet. She sold the business ten years later and went into real estate investing in Naples, Florida. She now lives in France, and focuses on writing.