You are here: Home / New Books / Origin of the Cosmos, Secrets of the Ancient World by M.G. Hawking and Jenna Wolfe Ph.D. 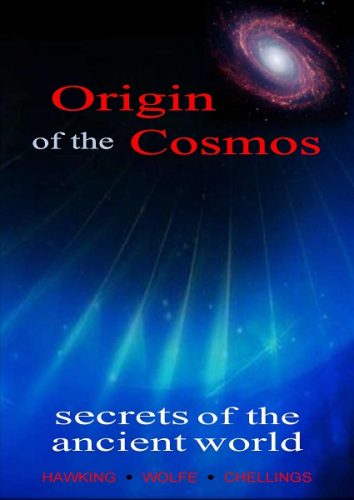 About Origin of the Cosmos, Secrets of the Ancient World by M.G. Hawking and Jenna Wolfe Ph.D.:

Free on Amazon April 7th thru April 10th. New Edition. Explore the mysterious origin of the Universe, the evidence of advanced civilizations of tremendous antiquity, and the possible lineage of their builders.
The Kepler Space Observatory has revealed that there are more than ten trillion galaxies in the observable universe. To put this in perspective, if you hold a single grain of sand at arm’s length against the night sky, the tiny patch of sky it hides contains more than 100,000 galaxies—not 100,000 stars, 100,000 galaxies.
It is impossible not to wonder where this incomprehensibly enormous universe came from. The consensus among cosmologists and physicists is that the universe as we know it originated from infinite conditions within a singularity that not only created the universe, it created space and time, all the matter that surrounds us, and the physical laws that govern our entire cosmos.
“Is the essence of infinity the uncountable, the immeasurable? Or is infinity the ultimate, complete, perfect entity?” —Enrico Bombieri, Ph.D., von Neumann Professor Emeritus
“Space, time, and matter are not eternal, their first emergence into being is a miracle beside which all others dwindle into absolute insignificance.” —William Knight
NASA’s Kepler Space Observatory has identified the existence of 4496 exoplanet candidates and 3750 confirmed exoplanets, that is, planets existing outside of our solar system. “Now we know that we’re just one of billions of small worlds that are very much like ours,” explains NASA’s Dr. William Kinney. “If you extrapolate that to our galaxy as a whole, which has more than 200 billion stars in it, the calculation based on the Kepler data is that there are around 40 billion planets like earth.”
“We might expect intelligent life and technological communities to have emerged in the universe billions of years ago. Given that human society is only a few thousand years old, and that human technological society is mere centuries old, the nature of a community with millions or even billions of years of technological and social progress cannot even be imagined.” —Paul Davies, Ph.D.
The creation stories of civilizations worldwide relate that their progenitors came from the stars or the heavens. Native Americans recount that their antecedents were the “Sky People” and “Star Beings.” The builders of Teotihuacan describe their “gods” as having descended from the heavens. Egyptian texts speak of their “bringers of knowledge” coming from Sahu and Sopdit (Orion and Sirius). The pre-Tibetan Zhang Zhung traditions, those of the Maya, the pre-Incans, the Sumerians, and so many others, all express the same account in diverse symbolic languages—their “gods” came from the stars, bringing advanced knowledge and the gift of civilization. These cultures were greatly separated both geographically and chronologically, yet their creation stories are strikingly similar and, in many cases, essentially identical. What could explain this? Who were these “gods”?
Explore answers to these intriguing questions and discover knowledge that for long millenniums has remained concealed under layers of legend and secrecy. An incomparable book for anyone interested in ancient cultures, their wisdom and origin. 2021 Edition Kindle Unlimited Book, e-reader page count 285 (estimated, count varies with the reading device used). For more information, please see the ‘Look Inside’ feature on the book’s Amazon page. Thank you.