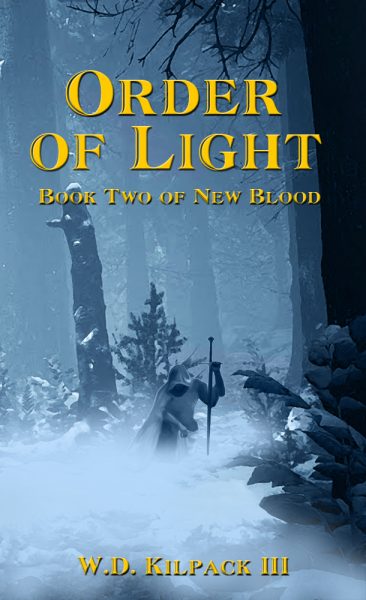 Despite the Guardian of Maarihk being condemned as anathema, and his very existence relegated to legend, Natharr resumes his ancient responsibilities as Mankind’s protector. He joins with a mysterious Firstborn companion, Ellis the Elder, to journey into the snowy reaches of Biraald, where his Sight promises he will find those who secretly adhere to the ways of the Olde Gods.

Although Biraaldi bloodlines show their Firstborn heritage more clearly than even in Maarihk itself, the two nations have never enjoyed peace. It has been far worse since the rise of Brandt the Usurper to Maarihk’s throne. Natharr and Ellis must navigate threats not only against the Firstborn, but the Maarihkish, as they seek out the sympathizers he Saw who are brave enough to resist Maarihk’s tyranny. Only then can the damage be repaired from when Natharr chose personal happiness with Darshelle and the young crown prince over his weighty responsibilities as Guardian of Maarihk.

Buy the book, and follow the author on social media:
Learn more about the writer. Visit the Author’s Website.
Get This Fantasy Book From Amazon.

Author Bio:
W.D. Kilpack III is an award-winning and critically acclaimed writer published in two countries, with works appearing in print, online, radio and television, starting with his first publication credit at the age of nine, when he wrote an award-winning poem. As an adult, he received special recognition from L. Ron Hubbard’s Writers of the Future Contest. He has been editor and/or publisher of nineteen news and literary publications, both online and in print, with circulations as high as 770,000. He is an accomplished cook and has two claims he thinks few can match: cooking nearly every type of food on a grill; and nearly being knocked flat when his grill exploded.

He received both his bachelor’s and master’s degrees from Westminster College of Salt Lake City. As an undergrad, he double-majored in communication and philosophy, while completing the Honors Program. As a graduate student, he earned a master of professional communication with a writing emphasis. He was also a high-performing athlete, qualifying for international competition in Greco-Roman wrestling.

He is a communication professor and a nationally recognized wrestling coach. He is happily married to his high-school sweetheart and is father to five children, as well as helping to raise five step-children. He was born in Salt Lake City, Utah, where he continues to live, coach and teach.