You are here: Home / Featured Books / On Deadly Grounds by Kaye D. Schmitz 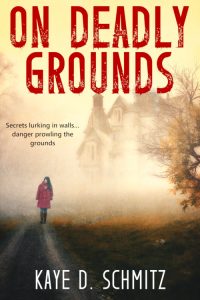 On the eve of an international G7 Summit, event coordinator Mattie Maguire discovers that the venue, a century-old estate close to Asheville, NC, is more than simply a picturesque setting. It is also the center of political conspiracies involving a ruthless Russian spy ring that will stop at nothing to steal the massive fortune they believe to be hidden there. The search intensifies and a rogue Russian agent attacks Mattie’s grandmother, still living on the estate. She hovers in a coma, barely clinging to life.

​As Mattie struggles to protect her family and ensure a safe event for the most important leaders in the world, her discovery of a fraudulent heir to the estate puts her own life in danger as well. But when her eighty-five-year-old grandfather is kidnapped and held at gunpoint, her path becomes clear. Despite her fear, she must locate the only person who has the information the Russians seek—the estate’s rightful heir, hidden away for decades after the murder of his father. But will the true owner’s return to his childhood home put his life in danger, too?

Author Bio:
Kaye Schmitz was first published in her small town weekly newspaper when she was ten-years-old. Her poem, “The Garden,” was a flower-filled fantasy that so surprised her parents and teacher, they all insisted she send it in to the local news editor. Later on she had a number of poems and short stories published in her high school newspaper. In fact, whenever the editor had an empty spot, he would contact Kaye and she would dash off a poem or short story to fill the space. During college and marriage, and children, and careers, Kaye had very little time for writing except for occasional poems from her heart. Along with constant fiction reading, singing with a group, Christmas baking and aerobic dancing, she also got a kick out of occasionally visiting psychics with her friends on Saturday afternoons. Every single psychic she saw looked at her palm and said, “Oh…you’re a writer.” Finally, she began to take it seriously, and when, years later, she visited an ancient cemetery in the lowlands of Georgia, one of the spirits there reached out to her and her first novel, The Consort Conspiracy, A Covington Family Mystery, was born. Kaye now lives in St. Augustine, Florida, and insists that she is still ten-years-old inside. She loves. in addition to her husband, her two grown children and four grandchildren, cartoons, circuses, carousels, and chocolate.