You are here: Home / Fantasy Books / Of Demon Kind 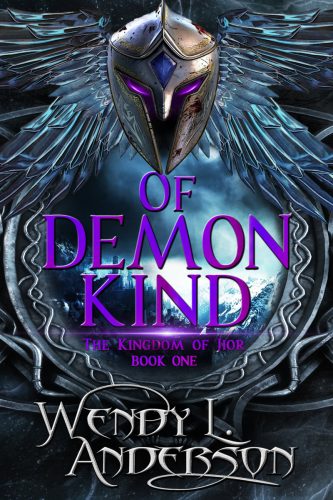 About Of Demon Kind:

Prince Lorn is all that is left of a once feared, evil empire called Jior. His father, King Kullorn, was the epitome of evil who warred against the continent of Vedt. With Lorn,
his half-human, half-demon son at his side, they plunged the kingdoms of Vedt into a bloody war, using their demon hordes to reap death and destruction on any who
opposed them. After Kullorn’s violent death, Lorn retreats into exile after their bitter defeat.
When Prince Lorn learns someone is using his father’s name to rekindle the war and revive Jior’s lost glory, he is forced out of hiding. To stop another bloody war before it
starts, he is willing to risk capture, imprisonment, and death. During his quest, Lorn unexpectedly meets his soulmate who heals him, body, heart, and soul. Together, they
must fight for their future and answer the ultimate question, can evil become good?

Author Bio:
Wendy L. Anderson, is a Colorado native, wife, and mother of two grown boys. A devout reader of the classics, fantasy, sci-fi and historical fiction, she has
decided it is time to write down the fantasies from her own mind. Writing about everything from fantastical worlds to the stuff of her dreams she takes her
stories along interesting paths while portraying worlds she sees in her mind’s eye. Her goal is to deviate from common themes, write in original directions
and transport her reader to the worlds of her creation.