You are here: Home / New Books / Not Dead Yet: A British Zombie Apocalypse Series – Book 1 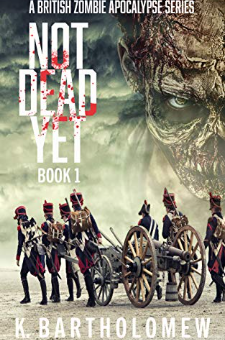 About Not Dead Yet: A British Zombie Apocalypse Series – Book 1:

How will the Victorians handle a zombie apocalypse?

Not all heroes are heroic…

In fact, some are outright dastardly.

After being expelled from Eton, Jack Strapper is tricked into joining the army and posted to an Irish cavalry regiment in the false belief it’ll be safe.

However, he’s horrified to discover the nation’s already amidst an ongoing apocalypse.

Worse still, his unit’s commanded by a mad colonel who’s intent on making him fight.

He was told it would be all pretty girls and parties. Oops. How will the now Captain Strapper cope knowing a million victims of the Potato Famine are roaming the land as zombies?

Yet, after an astonishing run of incredible coincidences and good fortune, he soon builds a reputation as an intrepid warrior.

But not all are fooled.

There is one officer, Major Lynch, the regiment’s most decorated soldier, who’s taken a disliking to the young upstart. Refusing to believe the tales of heroics, he’s disgusted by the way his comrades fawn over this boy who can barely even hold a sabre, never mind single-handedly vanquish dozens of foes.

And why are there no living witnesses?

After an unfortunate incident with his wife, Lynch now holds a personal vendetta and will stop at nothing to expose Jack for the coward he really is.

If you enjoy a zombie military series and a hilarious anti-hero, you’ll love the historical twists in Not Dead Yet.

Join my email newsletter to receive updates on new releases and free books at the following link: