You are here: Home / Mystery Books / Murder is the Only Option (DCI Cook Thriller Series Book 5) 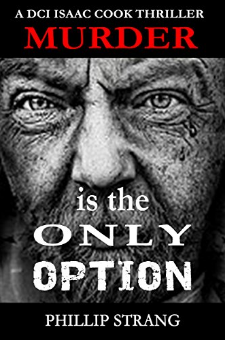 About Murder is the Only Option (DCI Cook Thriller Series Book 5):

He was thought to be dead, until he returns to exact revenge against those who had blighted his life. His only concern is to protect his wife and daughter. He will stop at nothing to achieve his aim..

‘Big Greg, I never expected to see you around here at this time of night.’

‘I’ve no idea what you’re talking about,’ Robertson replied. He looked up at the man, only to see a metal pole coming down at him. Robertson fell down, cracking his head against a concrete kerb.

The two vagrants, no more than twenty feet away, did not stir and did not even look in the direction of the noise. If they had, they would have seen a dead body, another man walking away.