You are here: Home / Featured Books / Murder in the Atchafalaya by Jim Riley 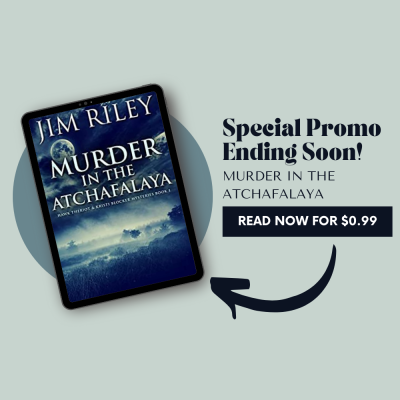 Murder in the Atchafalaya by Jim Riley

A lot of things can kill you in the Louisiana swamps, not the least of which are water moccasins, alligators, and maybe even something unworldly called a Rougarou. But as the body count rises in this jambalaya mystery, it becomes apparent that the increasing death toll is mostly due to some very bad villains and some very tough law enforcers.
Kristi is a young college graduate from West Texas recently hired and trained by the Treasury Department. While on the hunt for two of her colleagues, she manages to get herself assaulted and lost in the Atchafalaya Basin. Hawk is an ex-military combat vet now working for the United States Ranger Services. He’s asked by his old friend, the Parish Sheriff, to try to find Kristi. What he finds is not only the woman he’s looking for but also a hell of a lot of trouble. Together, Hawk and Kristi wind up in the middle of ruffians, counterfeiters, financial scalawags, and murderers. As they try to figure out what’s happening and why, while continually staying one step ahead of assassins, they begin to form a bond of respect, friendship, and perhaps even more.
Author Riley does a first-rate job of steeping the reader in the milieu of South Louisiana and Cajun mores. From murders at mudbug fests to menacing mosquito swarms to monumentally malevolent snake pits, he puts the heat and humidly on every page. He’s also adept at weaving a spider-webbed plot that is both intricate and credible. There’s action, suspense, humor, and even a dash of romance in this gumbo of a novel that promises to start a series of adventures for Kristi and Hawk.

J​​​​​​​​​​im Riley was born on the banks of the Cane River in Natchitoches, LA, the heart of the southern cotton patch. Growing up in this rural setting developed the love and passion he has for the outdoors and for the wildlife he hunted.

​ After graduation from Louisiana State University with a degree in Industrial Engineering, Jim worked in the oilfield for more than twenty years. Now he is happy at home with his wife.