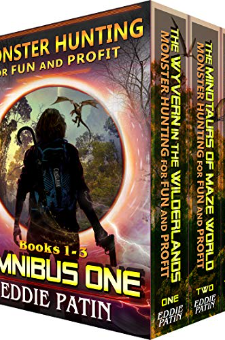 The First Three Books of the Series together for the price of two!

The Wyvern in the Wilderlands

Jason always loved dinosaurs as a kid. He never thought that one day he’d be trapped on a dinosaur world struggling to stay alive.

This is the story of Jason Leaper of Earth, universe 934. In the mind-bending expanse of parallel universes and higher dimensions, the unexpected death of an alternate Jason Leaper launches our hero’s boring life into a wild adventure of survival, fantastic creatures, and bizarre other worlds!

All Jason Leapers across the infinite multiverses have the ability to rift–to open portals through other dimensions to shift between alternate realities. And when the last survivors of the Reality Rifters–an interdimensional Monster Hunter crew–come looking for Jason 934, the directionless man suddenly finds his latent powers awakened and his life is changed forever. When he is unexpectedly teleported to the Wilderlands, a vicious and primordial alternate Earth overrun with dinosaurs, primitive savages, and epic wilderness, Jason is cast into a visceral struggle for basic survival and needs to figure out his rifting powers in a hurry if he expects to get home. And when the monster hunting planeswalkers finally catch up to him, will Jason Leaper 934 slay the apex predator in the region and take his place in the Reality Rifters?

The Minotaurs of Maze World

Jason Leaper 934 is back from his survival adventure in the Wilderlands, and is about to go on his first mission with his new friends, Riley the cybernetic soldier, and Gliath the shapeshifting leopardwere.

When Jason is introduced to the wild and mind-bending concepts of planeswalking and visits ‘the Market’ for the first time, he’s definitely intimidated by Riley’s expectations of him. With little to no direction, he’s supposed to figure out his rifting powers in a hurry while on the job to hunt and kill minotaurs on a bizarre maze-like world and harvest their hides. Riley himself is upset about losing the last Jason and essentially starting over–he never wanted to be the leader of the Reality Rifters! As the three of them hunt for bounties on Maze World, Riley’s patience is put to the test and Jason tries to forge himself in the fires of determination while wondering whether or not he’s cut out for this kind of life.

And when the hunt becomes more complicated as competition with a rival mercenary group turns deadly, Riley and Jason must both face their difficulties with skill and good sense, or all three of the new Reality Rifters might end up dead–either at the hands of the other hunters, or under the horns and hooves of monsters!

The Heart of a Necromancer

(Description inside – not enough space here)

The Monster Hunting for Fun and Profit series is a fast-paced adventure story about Jason Leaper 934 and his planeswalking Reality Rifters, Monster Hunters for hire. If you love books about guns, survival, vicious and terrible mythical monsters, cosmic horror, time travel, DINOSAURS, and exploring strange new worlds … read this today!

Reading Order for this series:
Book 1 – The Wyvern in the Wilderlands
Book 2 – The Minotaurs of Maze World
Book 3 – The Heart of a Necromancer
Book 4 – The Giants of Shattered Swamp
Book 5 – The Manticores of Pristalline Paradise
Book 6 – The Dragon of the Quantum Void

Author Bio:
Eddie Patin writes science fiction adventure, cosmic horror, and fantasy. His books are full of action, guns, monsters, and weird places. When not writing, Eddie is playing with firearms, swords and other pointy things, enjoying craft beer, a good smoke, or maybe some scotch. He might also be fighting zombies, brawling in BattleMechs, or contemplating other dimensions.

Born in south Louisiana, Eddie Patin lives in beautiful Colorado. He’s a musician, an artist, a marketing consultant, and a graphic designer. His books are a gritty, fast-paced blend of 60% science fiction and 40% fantasy with a dark, swirling tinge of terror and the bizarre.

Travel to parallel and bizarre universes to hunt monsters for profit and adventure … with dinosaurs. Less language and dread than Apocalypse Gate, and boatloads more adventure. A little less horror, but a whole lot of focus on feeling cosmically insignificant. Think “Rick and Morty” with guns, gold, and mythological beasts. Six books and two omnibuses, plus short stories and extras.

Modern, dark and violent, full of chaos and dread, bad language, wild and crazy monsters, and alien/demonic worlds, this series follows six sets of deep characters trying to survive the end of the world. You haven’t read anything like this. It starts with an EMP, societal collapse, and prepper/SHTF survival, then it gets weird and horrific. Three books, one omnibus, plus short stories and extras.