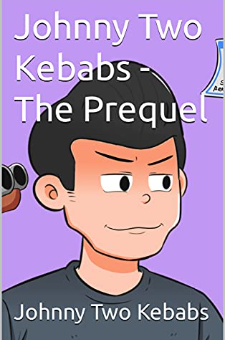 About Johnny Two Kebabs – The Prequel by Johnny Kebabs:

On 15th June 2011 an extraordinary event took place in Brixton, south London. An Irishman ingested two doner kebabs in 1 minute 59 seconds after already having consumed 13 pints of lager. Now, for the first time, the true story of the events leading up to this feat is recounted by the protagonist, “Johnny Two Kebabs.” In this “prequel” Johnny relates the truth about how his exploits have ensured his place in the “Pantheon” of characters who have shaped modern society. This is the story of Johnny Two Kebabs.

Author Bio:
Who Is Johnny Two Kebabs?There has been much speculation in recent years as to whether Johnny Two Kebabs really exists. Is it true that on 15th June 2011 after drinking 13 pints of lager he polished off two doner kebabs in 1 minute 59 seconds? Is Johnny Two Kebabs just an urban legend? Is the song that was written about him and for which the video appears on the internet just in the tradition of Irish blarney and storytelling? Is it a type of Celtic mythology about larger than life figures? Were the comics which mysteriously appeared on the Internet in 2020 just fake news? Now, at last, in his own words, Johnny Two Kebabs recounts his adventures in a series of memoirs