You are here: Home / Featured Books / In The Beginning, There Was a Murder by P.C. James 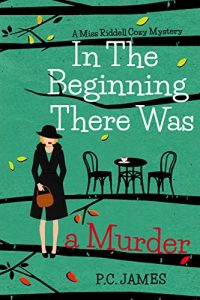 In The Beginning, There Was a Murder by P.C. James

A secret liaison. A violent murder. Can one woman solve the crime without joining the body count?

Northern England, 1953. Pauline Riddell has grand ambitions for her future at the armament factory. So, when her closest workmate reveals a salacious affair with a married man, Pauline refuses to risk her career by listening to the scandal. But she’s shaken to her core when the police arrive with news of her best friend’s homicide.

Desperate for justice, Pauline’s insistent poking into the investigation only makes her the prime suspect. And now to clear her name, she must unravel a web of deadly clues entangling her in a sinister plot.

Can Pauline catch the killer before they strike again?

Author Bio:
Paul James is an engineer with a life-long interest in books and writing. Originally from England, he’s lived with his family near Toronto, Canada, for many years and where he walks, runs and takes wildlife photos whenever the weather will let him. In his writing, he likes to capture the humorous side of life even when sometimes the world doesn’t seem to warrant it